Dexter wrestles with the decision of where to send his son to school while chasing down a mark at his high school reunion. Also, Amanda Knox acquitted but that doesn't have anything to with Dexter because she was the subject of a witch hunt by tabloid media - Congrats Amanda, have a good life! 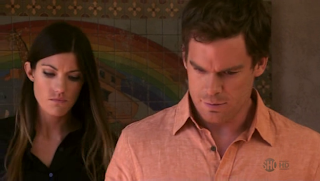 What a strange, strange episode. There are two moments that really stood out as being not of the world this show has tended to inhabit - the first of course was the random blowjob Dexter received from former classmate Trisha. Rather tragically, the actress who played her wasn't able to parlay that into a recurring role. There was no part of the situation that made sense in (my favorite second favorite phrase) the context of the show. Actually, it seemed more like something that would have happened in a comedy - I had just recently rewatched the high school reunion episode of Party Down and Trisha had the scent of a Melinda Weintraub about her.

The other was the shootout in the restaurant where Deb and Quinn were having dinner.Um, WHAT? What the hell was that? I hope that's part of a larger storyline rather than some random gunman shooting up a place because (my favorite phrase) that made no sense. It was again like something from a comedy, where Quinn's prospective marriage proposal is hilariously thwarted by a surprise gunfight.

Speaking of Deb, it could just be me but her scenes with Dexter felt really awkward. I've had trouble taking her character seriously since the disastrous season 3 and the debacle at the end of last season with her is a major roadblock to credibility. I kept expecting her to suddenly say, "Actually Dex, I knew you were in that room with Julia Stiles the whole time." It would have been fitting too.

I haven't read any press clippings for this season whatsoever and mercifully don't really know what to expect going forward, but it seems like religion will play a big part. The new villains, played by Ed Olmos and Colin Hanks (who I mistook for a young Dexter in flashback at first) quote from Revelations and their motivations are unclear at this point. Their presumed nemesis however is solidly atheist as he almost takes glee in revealing in his inner thoughts at regular intervals within the episode. I'll say to the writers, as Johnny Sack once said Tony, "Are you sure you wanna go down this road?"

Dexter's main prey in this episode, Tom Brady lookalike Joe Walker also claims to be a Christian of unidentified denomination. Everything to do with the high school reunion which brings them together was pure comedy gold - most people seem to want to point to the hammer time dance. I liked the football game best though - It sure didn't look like flag ball to me. Also, whose bonehead idea was it to make Dexter an offensive lineman? There were way fatter people on the field than him.

Astor and Cody seem to be gone for good, not mentioned at all and barely referred to in the "previously on" recap of the prior seasons which is sad, with Quinn plotting to take away his sister, his son will soon be the only thing left connecting him to this world. He does have newly introduced Angel's sister of indeterminate name hanging around babysitting, what type of role will she take? She notes to Angel Dexter's frequent disappearances, she suspects to have deep long thinks about Rita. What happens if he starts finding that hinky and probes that situation?

He and LaGuerta have at least divorced ending one of the more facepalmy storylines to have occurred over the last few seasons. I spoke of not being able to take Deb seriously since Season 3, it's been longer than that for LaGuerta. Her new storyline, having blackmailed her way to the top of the ladder is more ludicrous she has outlasted her stay as a main character on the show. Daphne from Heroes, one of Masuka's interns would be a good replacement, as a budding forensic expert herself.

Fun episode, I enjoyed it though it was somewhat less subtle than we're used to in a show about bloody, gory murder...

"Dexter" airs Sundays on Showtime at 9:00pm EST.
Posted by jigenzanittou at 13:40