Sadly I haven’t managed to devote the time I need to follow college football as closely as I’d like this season but even so I still have plenty of opinions! Isn’t that always the way? The first and most important thing going around of course is the Notre Dame Fighting Irish finally making it to the Championship Game after more than 20 years in the cold. How tragic and ironic that they should get there the year that famed Notre Dame homer (I kid) Beano Cook should pass away. I’d certainly have loved to hear his insight as although other parts of his expertise had begun to fade, you could always rely on him for top notch historical value regarding the Irish. Also ironic is that this is the year I managed to enroll one James Macswiney to pick games with me. Of course he dropped off halfway through, too lazy to check his Facebook but I know he would have picked his catholic brothers every single week in any case. 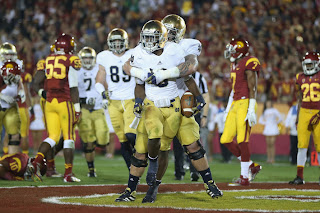 In the Pac-12 I think everyone except Colin Cowherd is happy that Lane Kiffin and the USC Trojans had such a disappointing season. It really couldn’t have happened to a nicer guy, right? He won’t get fired, at least I’d be pretty shocked and I have a fairly bad feeling that once they get through the scholarship issues, they will be bouncing back harder than ever. Also disappointing was – just one win away from the title game, a los against a team they dominated in the past two years. Our own connections to the team notwithstanding, their dynamic approach to the game has been refreshing all these years. Up in , I am not on the bandwagon that is looking to oust Steve Sarkisian, even after the debacle of losing to . Considering where Ty Willingham sunk the Huskies to, I think Sarkisian has done a decent job returning the UW to relevancy.

Several conferences just failed to show up this season. It was the usual suspects too – the Big East was a non-entity once again, the ACC flopped when it came to big time matchups. The suspended aside, the Big Ten was fairly anonymous also. I believe the Buckeyes though could stand toe to toe with any team in the nation. Urban Meyer was surely a canny hire there. The Big 12 on the other has had more ups and downs than Ted Mosby’s love life. I don’t think any of those teams, even the surprising could have handled the title game anyway. As for the SEC… well, they are just the SEC, business as usual. I hope they are not too smug over there.

Read more »
Posted by jigenzanittou at 22:18 No comments: