True Detective - S2 E1 - The Western Book of the Dead

An all new season of True Detective introduces us to four new leads and a whole lotta laughs... or not. 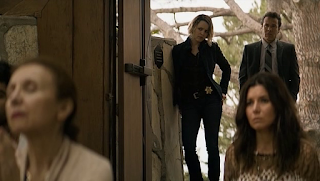 Brief thoughts and spoilers after the jump.

Some brief thoughts first on Season One of True Detective since I did not get into it here at the time. I was in on it right away and loved the first four episodes, especially the vaunted six-minute tracking shot. After that, I felt as though it tailed off, lost momentum and relied too much on Matthew McGonagoggle's Rust Cohle stringing together a load of nonsense phrases and sounding very profound. I suspect the presence of stars like McConaughey and Woody Harrelson are what propelled the show to its popularity and milennial culture throne but what drew me in and kept me invested was the atmosphere.

I always appreciate shows that make you really pay attention to the screen as you watch. It's something I always appreciated about Mad Men and I never fail to be ticked off when I start watching something and whoever I might be with starts playing with her phone. It's something I find True Detective does quite well. Rather than get too caught up in dialogue, the strongest moments are conveyed via gesture, a certain look or the scene that has been set.

It's why by far the weakest part of the Western Book of the Dead is Vince Vaughn's character Semyon (named after a powerful wizard from Russian fantasy novel The Night Watch). To me he seems rather overwritten and is definitely awkwardly performed. Perhaps I am missing the point with him but in his first scene, providing Detective Velcoro an avenue for revenge, he did not seem like a man in charge of the situation. Rather he came off like a comedic bro actor attempting to play a serious noir mob boss. It felt slightly more natural for him at the pitch presentation later in the episode where ironically things started going all pear-shaped for his character. Hopefully he settles quickly as thus far he is proving a rather unwelcome distraction.

As Officer  ̶T̶i̶m̶ ̶R̶i̶g̶g̶i̶n̶s̶  Paul Woodrugh, Taylor Kitsch is marginally better. It is difficult to gauge as unlike the other two lead police on the show, his walls are all the way up. It would be an easy set-up, especially considering his um, defect, to say there is something in him that is ready to explode. On administrative leave it is questionable how much he could add to any ongoing investigation which would no doubt add to that frustration and self-loathing but for the moment as the only one not directly or indirectly related to matters of police brutality, he is the defacto hero moving forward.

There is nothing as subtle about Colin Farrell's Detective Velcoro who is positioned to take the lead on the investigation. As an archetypal alcoholic on the take there is no doubt a streak of brilliance within him coupled with a forthcoming crisis of conscience which will set him at odds with his puppetmaster Semyon. I can't say for sure whether I'd prefer to see a redemption arc play out or his final fall, in fact I'm not sure I care, so over the top the performance, the characterization a little too knowing and calculated. Maybe that is the point in and of itself but just as Wire junkies gravitate towards Omar, I'm sure that Velcoro will be the cult figure gracing everyone's ironic t-shirts come fall.

Detective Antigone Bezzerides  is similarly belligerent and pronounced with her, her father and her sister torn straight from the wet dreams of some sushi guzzling Redditor but as dubious and contrived as her situation might be, Rachel McAdams plays the hell out of her and I won't hear a bad word about her. As long as she doesn't fall into an ill-advised, clichéd romance or whatever the violently sexual equivalent of that may be with one of her fellow true detectives, I cannot wait to see how she develops as the episodes unfold.

The tone of this repilot is overbearing, so serious and dark that it's almost difficult to take seriously but I liked the premise, the setting and the potential. LA Confidential is one of my favorite books and also one of my favorite movies and this new season certainly has the feel of a James Ellroy epic so for now, I'm happy to suspend the critical eye and enjoy the trip on which we are about tod epart

"True Detective" airs Sundays on HBO at 9:00pm EST.
Posted by jigenzanittou at 11:44