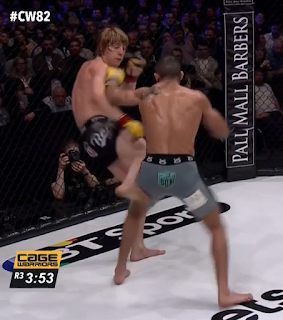 This is a rematch of the main event at UFC 187 in May 2015. In that fight, Daniel Cormier defeated Johnson by Rear Naked Choke in the third round to win the vacant Light Heavyweight belt. They were originally booked to fight at UFC 206 in November last year but Cormier pulled out with a groin injury, the second time he has withdrawn from a title fight and one of four cancellations of bouts involving AKA fighters within the past five months.

"Rumble" Johnson has earned his second title shot in style with three consecutive knockouts against dangerous contenders in Jimi Manuwa, Ryan Bader and Glover Teixeira. Despite that, I don't feel as excited as I should for someone with that kind of potential and I find him very difficult to root for. With Jon Koppenhaver a.k.a. War Machine's conviction on multiple counts of aggravated domestic violence fresh in everyone's memories I find it odd that no one has mentioned Johnson's multiple alleged incidents of threats and violence against women.

Needless to say this is a serious red flag but the UFC apparently does not see it that way and judging by their promotional material, which Cormier has complained about, I think they expect him to win and be their newest champion. I would have to disagree with them on that point. It's true that Johnson has looked great in the cage lately. It's also true that "DC" looked absolutely awful against Anderson Silva in his last fight at UFC 200. Someone like "Rumble" with that kind of fight ending power has the ability to make any and all doubters look very foolish with one punch, of course.

I truly believe however that Cormier has the advantage with every single intangible. In my preamble I talked about in-cage evidence and from what I saw in their first fight, there was a clear difference in desire. Henri Hooft claims that when he yelled "Don't give up" to Johnson as Cormier spun into position on Rumble's back to lock in the choke, he was imparting technical advice as in don't give up the position. That may very well be true but my eyes still work for now and I saw a fighter who did look absolutely done in that moment.

Barring that puncher's chance I think the same outcome unfolds here as in their first fight. Cormier survives an initial fast and furious flurry, grinds down Johnson and finishes him on the ground. Look forward to Cormier vs Jones 2 later in the year. In this case, I may be biased though.

At this moment in time, these two fighters are heading in opposite directions. Former Middleweight king Weidman has dropped two in a row while Gegard Mousasi is surging up the rankings, winning four in a row in reasonably convincing fashion. I would call most of those victories professional rather than spectacular. Weidman's defeats are somewhat misleading. Although he was finished in both, each was reasonably close at the moment it all went horribly wrong for him.

Weidman's big weakness is his lack of quick twitch speed. Mousasi is a high level striker far outstripping Weidman in that respect but sometimes takes a passive approach in the stand-up, waiting to pick his spots. If Weidman knows what is good for him, he will clinch with Mousasi, put his back against the cage and grind him out.

Frank Pozen notes that Sean Shelby must really like Cynthia Calvillo what with ehr being booked on back to back main cards on PPVs. Both are nearing the end of their 20's and my guess is the UFC is desperate to push a Hispanic contender after Alexa Grasso's stumble. Calvillo is a big favorite mostly because she just fought and people have no idea who Pearl Gonzalez is. The level of her recent opponents is not nothing to write home about, but then again neither any of those in Calvillo's three pro fights prior to her UFC debut.

Both women are proficient grapplers but Calvillo has been far more active recently - this will be her fifth fight in just over seven months. Although she has been training at a big name camp with Team Alpha Male, your progress can slow with so much fight prep in such a short time. Gonzalez is aggressive and can sometimes put herself in bad positions but has also had some time to prepare since her last fight and is not at a deficiency experience-wise compared to her opponent. I think Calvillo is overvalued at -250 and the best bet is Pearl Gonzalez. Perhaps she can get a Coppertone sponsorship with a submission finish.

How this made the main card on a major event is frankly a mystery. Perhaps it's because the Buffalo Bills sometimes plays home games in Canada and Patrick Côté is Canadian? Although having said that, he is not even from Ontario. Côté was on a solid run of three wins before getting obliterated by Donald Cerrone. His last loss before that was at the hands of Stephen "Wonderboy" Thompson who also picked him apart.

Alves can hit hard but is not as patient or accurate as either one of those guys. While some have questions about Côté's chin after his loss to Cowboy, I think it's overstated. In this matchup, he will have a size advantage and I expect him to be more comfortable countering. If the fight goes to the ground I think he can win there so while I think this one will be close, I give Côté the edge to win at not home.

Will Brooks vs [9] Charles Oliveira

Charles Oliveira's ranking of course refers to the Featherweight division with this bout being contested at Lightweight. He failed to make weight four times in his last ten bouts so it's kind of stunning that he was allowed to keep attempting to fight in that division without the kind of sanction that other fighters have faced. After losing three of his last four, getting finished in all, his back is against the wall however.

Will Brooks is also under pressure despite only having lost only once. The former Bellator champion has suffered the fabled Octagon jitters since signing with the UFC a year ago, looking very average in a victory over Ross Pearson and a TKO loss to Alex Oliveira last October. It takes time to adjust to the step-up in competition and surroundings, as it did for Eddie Alvarez but both men have heart in abundance, something you can't always claim of Charles Oliveira. I have faith that his level is higher and think he can at minimum grind this one out for an ugly win to put him back on track and perhaps lead himself to a future bout with Alvarez.