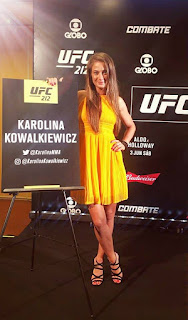 I was just generally a bit angry when I wrote my last post and considering the events of last week Monday and the subsequent joy and wild celebrations following the Europa League final victory, I'm prepared not to call Manchester United's 2016-17 season a failure. That's not to say it was a success. We all made fun of Liverpool, quite rightly too back when the won the Mickey Mouse Treble in whatever ancient, irrelevant year that happened so it's a little silly for us to parade our three trophies around now. At the same time, we have three trophies and they have zero and we're back in the Champions League to boot so who can complain about that? I'm content to wait and see what happens next season from here.

UFC 212 meanwhile is not the most superb, star-studded card we've ever seen. Expecting people to pay $60 for what amounts to, main event aside, a Fight Night card seems optimistic to me but there are some interesting, potentially very fun fights on deck...

I had been leaning Max Holloway ever since this fight was announced but re-watching the way in which Aldo toyed with someone as experienced and tough as Frankie Edgar has flipped me. While Holloway oozes skill and class with his angles and footwork, "Scarface" has seen it all before and battered his opponents regardless. Expect the leg kicks to be heavy and frequent early on followed by jab-jab-jab as he makes Holloway chase him.

Aldo can fade late in fights while Holloway doesn't seem to have conditioning issues but by that time I think it will be too late. Aldo by unanimous decision, especially at home in Brazil. While the fight ought to be interesting what I'm really looking forward to is after the fight. Whoever wins they had better damn well call out Conor McGregor because he still casts a considerable shadow over the Featherweight division. Neither of these guys can really feel satisfied calling themselves the champion when he defeated them both and never lost the belt inside the Octagon.

I am very much over the Maygregor nonsense. Who cares? Do you really care? I really don't. I want to see McGregor fight MMA, not a sport that limits the range of his skills and training. Aldo or Holloway should call him out as a coward for running from title fights. It doesn't matter if it's true or not, just present the fact: Through four championship belts, Conor has ZERO defenses. Get it together, man.

I think Claudia will win this but the +300 Kowalkiewicz is listed at seems off. Claudia doesn't finish fights anymore and I highly doubt she can finish such a resilient opponent. I expect her to seek takedowns which will ultimately score her enough points to take a decision at home but I think Kowalkiewicz has an underrated ground game and will not be totally dominated. If Claudia gets worn out the way she did against Joanna Jedrzejczyk, things could get interesting in the third round.

Nate Marquardt has had a tough go of it lately and would not be considered a big threat for most ranked Middleweights at this stage of his career. However, Vitor Belfort's fall from grace has been hilarious and tragic. Now that he is off the juice, his chin doesn't hold up anymore and Marquardt bangs hard enough to break him and send him off to, presumably, Bellator in a certain state of disgrace.

This Middleweight clash was presumably promoted to the main card after Anderson Silva was pulled from the event. No doubt the matchmakers at the UFC are expecting a first round knockout from this bout. "Holy War Angel" Bamgbose is a power hitter with highly unorthodox movement but is also a little small for the division. Paulo Costa is highly aggressive and violent and I expect him to be swept up by the tide of the crowd and get a quick finish to extend his unbeaten run. As a handsome, exciting guy to watch I think he is a candidate to get a bit of a push after this.

While you can expect a performance bonus from Borrachinha vs Bamgbose, this bout is the one to watch for Fight of the Night with both Silva and Medeiros liable to swing for the fences when cornered. Silva showed significant improvements in his approach and tactics in his last fight against Luan Chagas who was a late replacement. Medeiros aped Nate Diaz's style in dispatching journeyman Sean Spencer. Both fighters have been shown to be a little chinny in the past but I give Silva the slight nod here. I think he can connect with kicks to take some early momentum and work from there. Medeiros is tough as nails and will make it a battle but again I think home advantage plays a role here with a split decision being a very foreseeable outcome.