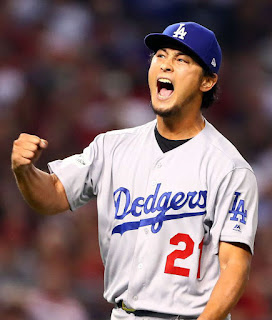 Racial inequality is a hot button issue in the NFL lately with the dumb kneeling protest resulting in certain athletes and ESPN pundits comparing the plight of NFL players to those of 19th century slaves. Which is patently absurd but that's a whole other thing.

Cue Houston Texans owner Bob McNair apparently saying during a closed-door meeting with other NFL executives and players, "We can't have the inmates running the prison" in apparent reference to the protest. Needless to say that didn't go over well.

After push back from Troy Vincent, McNair realized his mistake and apologized. Once outed, presumably by the players, he issued a public apology, describing the quote as a figure of speech. Funny, I always thought the phrase was about inmates running the asylum rather than the prison with does have certain connotations.

His players with the Texans predictably chose to protest (by kneeling which... makes it completely indistinguishable from the normal protest and essentially meaningless) though I don't know what they are hoping to achieve. I don't know if Bob McNair is a racist and I don't know what's in his heart. However I really don't think this is a big of a deal as it's being made and of these three issues this is definitely the most talked about what with NFL being the number one sport and racism the number one virtue signalling post. 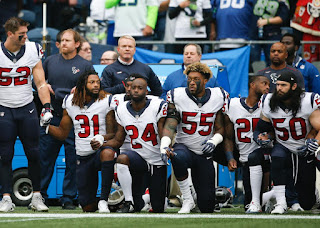 I believe him when he says it is a figure of speech. Of course he did not literally mean that the NFL is a prison and the players are incarcerated. I do think he looks down on his players but here's the thing, what I really believe. It's not a black-white thing. It's a Big Rich Boss vs lowly employees thing. He has the power so he likely sees all beneath him as lesser.

Perhaps it's revealing of his character. I would also say though from years of observance more often than not, players are morons who don't understand how the business behind their product works. You really can't have them dictating policy. This story is being framed all wrong. Bob McNair is being accused of issuing a racist dog whistle. As usual, the ones whistling are the scandalized sports analysts.

So during Game 3 of the World Series Yu Darvish, the half-Japanese pitcher for the LA Dodgers turned in a stinker, giving up multiple big hits including a home run to Houston Astros first baseman Yuli Gurriel.

Gurriel returned to the dugout and, during banter with team mates, mocked Darvish with a slanty-eyed Asian gesture. You know the one, no need to describe it further. This was caught on camera along with what appeared to be Gurriel using the word "chinito", a derogatory catch-all term for East-Asians.

He's far from the first. Miley Cyrus is probably the most famous offender. Many, including whoever makes Snapchat filters evidently don't think it's a big deal. I'm probably just generally desensitized. When I saw this, far more than being angered or upset my feeling was "Well jeez, of course people are still this stupid." But I thought Mina Kimes had a very good take on this kind of thing:


is there anything more predictable than people who aren't affected by certain words and gestures explaining why they aren't offensive
— Mina Kimes (@minakimes) October 28, 2017

It's something well worthy thinking about. Rather than demanding someone not be offended, instead seek reason from all involved. Darvish was aware of what happened while the game was still going on, gesturing animatedly with his teammates but after the game, he emerged with a very classy and measured response:

It's a major reason why this is only a medium for me. If Yu Darvish, the target of the offense can forgive then so should we all. Again, we don't know what is in Yuli Gurriel's heart and hopefully he can learn from it. Hopefully it can be a teaching moment for many though so many online are entrenched in defending extreme positions.

Here we get to the heart of my feelings on this subject. Here's a mantra for you: Intent Matters. Bob McNair made a statement which could easily be taken the wrong way but I don't think he intended to be racist. I think he's 'just' oblivious. I don't think Yuli Gurriel intended to demean all Asian people. I think the adrenaline is flowing and he's probably just a moron trying to give his friends on the team cheap laughs.

The guy in Story Three on the other hand? He's just a complete cunt. 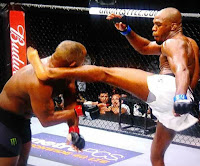 Anyhow, SGINHO wins by, shock, surprise, decision and proceeds in his post-fight interview to call Brazil "a dump" and the Brazilian fans "filthy animals" while egged on by Daniel Cormier who by the way turned in an insufferable performance on color commentary but that's a whole other story. He then has to be hurried out of the stadium by security and skips the post-event press conference presumably because the UFC is smuggling him back to Florida before he is murdered by the PCC.

I was going to talk about this in my UFC 217 preview but instead we'll get to it right now because it's relevant. Because of the notoriety (heh) that Conor McGregor has attained with his promotional antics, everyone now thinks they have to be a loudmouth in order to get attention. The problem is, most of them are really fucking terrible at it.

I've seen some people comparing SGINHO to Chael Sonnen based on how they are both power wrestlers who can't strike and talk a lot of crap, especially about Brazil. First of all, and this is something that never occurs to the people who make these kinds of comparisons, that doesn't mean Chael Sonnen is good! Secondly, Chael has charm and wit about him. SGINHO is just a black hole of charisma. Thirdly, Chael was never fucking dumb enough to say any of that stuff in a stadium full of angry Brazilians. Time and place, man.

McGregor plays the villain in lead-up but once the fight is over he always shows a reasonable level of respect and appreciation for his opponent and fans. SGINHO, who knows what's in his heart (again) but he sure never shows any of the humility that might make you think he would be a tolerable person to occasionally be around. 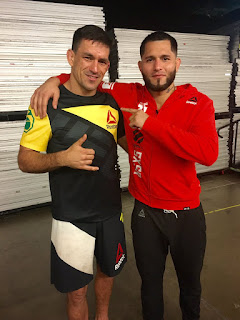 I understand trying to promote the fight. I understand trying to promote yourself. But when the fight is over and you're still being a complete cunt it leads me to believe that yeah, you're a complete cunt. How about taking a leaf out of your buddy Jorge Masvidal's book. It's fun to say before the fight you show up in all black because you're attending a funeral for Demian Maia's career but once it's over, react with grace, seek him out and make your peace. Obviously SGINHO is not a coward in terms of of his readiness to fight but as far as his willingness to stand up and be held accountable? Cowardly cunt.

This Guy I've never Heard Of has a very strong base of skills and room for improvement that could allow him to develop into an elite fighter. But as long as continues acting like a cunt, I won't be rushing to a TV set to watch as much because he is really boring to watch. If his goal is to increase his name value, it's not doing much for me.

As usual you have gangs of idiots fighting each other about whether you should be super offended or not about this. My main takeaway of course is not that you should be offended but rather you should think this guy is a cunt. One of the main arguments made by those who are triggered by people being triggered by SGINHO is that Brazilian fans are notoriously raucous and chant "Uh Vai Morrer" ie "You're Going to Die" and so on.

This is a really fucking stupid argument. It's understood that they're not actually threatening you with death - it is, to come full circle, a figure of speech. Fan is short for fanatic and they're trying to create an atmosphere. You, the athlete are supposed to be the professional one. I'm not so into some of the silly stuff that goes on when fans (in general) try and tear people or opposing teams down more than supporting their own but maybe more about that some other time. You all can do better.