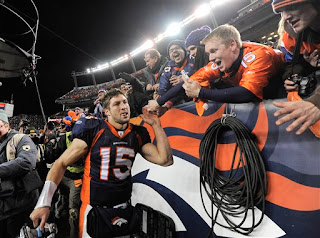 All underdogs this week, and all of them were easy picks. There is often a big overreaction to big winners in the wild card round. The Saints put up a lot of points on the Lions and the Panthers, but the 49ers are much stiffer and on their own home field should be able to hold the Saints far closer. The Saints won't roll over getting hit a little but it won't be the cake walk that many expect. In the evening matchup, I have a strong suspicion the Patriots will pull away late and win by three touchdowns like the first matchup but the better value is with the Broncos. I doubt it will be their finest hour.

TJ Yates may be starting at quarterback for the Texans, but I don't have faith that the Ravens can cover 7.5 against a team with a defense as strong as Houston. In the final playoff game, Green Bay may be the number one team in football but I don't think the gap is that large over the following pack (no pun intended). On offense the Giants can keep pace with the most overpromoted player in the league and on defense, they might be better. Home field counts though - I like the Giants to cover, the Packers to win. 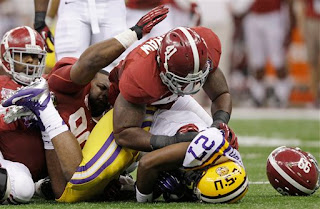 We both liked Alabama and on my part it's because I had been picking against Jordan Jefferson ever since he was reinserted as the starter and so it proved as he flopped in the big game.