Bezzerides and Woodrugh investigate the Mayor of VInci while Semyon's downward spiral continues. Meanwhile it turns out the headline actor of the show was not killed off in the second episode after all. 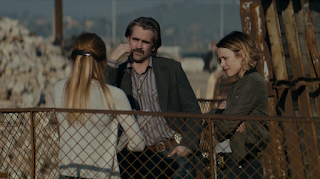 I don't feel like there is much to talk about here because basically this episode followed the same path as the last one - The investigators chase down a bunch of worthless leads, Semyon finds his support and influence being stripped away and then right at the end a masked dude causes a whole load of trouble. I suppose I mean to say I'm still waiting to be gripped by the whole thing.

Of course, Velcoro is not dead. One thing I will say is I have no idea who the guy singing in his dream was or if he was meant to be significant. It went completely over my head. After getting checked out by the doctor and getting told essentially that all his bodily functions are failing, he goes to visit his father, a retired cop who is basically the same guy as him and a depressing vision of his future life. The doctor asked Ray if he even wanted to live and if his constantly drunk weed-addicted father is his ultimate fate it's not so hard to see why he wouldn't.

Bezzerides calls in on the Mayor of Vinci's mansion in Bel Air with Woodrugh, I'm not entirely sure why but I think it's just because she heard rumors about the debauchery and wanted to see it for herself and get in on the action. Maybe. Actually this scene confirmed to me what I had thought all along which is that True Detective Season 2 is really just Heavy Rain without all the rain. Four different souls interconnecting while trying to solve the same crime.

After getting cowed by the Mayor's son, Bezzerides retreats to her superior's office where Brianna Barksdale tries to bully her into extra work investigating Velcoro. Frustrated, she later lashes out and cruelly cuts down a lovesick trooper whom she had been having a brief affair with, although it seems like a pretty common occurrence for her. Velcoro saves her from getting splattered all over the highway by a truck later on and my fear that she has her eye on him next ratchets up another notch, especially after overhearing his troubles with his ex-wife Blah-Blah (Abigail Spencer) which ought to provide her with an in on his corrupt dealings but instead will lead to them forming an unlikely bond.

Meanwhile she has also taken one look at Woodrugh and figured out that he is secretly gay and therefore can be trusted to go question a bunch of hookers to see if any of them have info on Ben Casperre. Of course it is also worth noting that he is not just gay, he is gay with Tony Bravo (Gabriel Luna) making his triumphant return from the jungles of generic south-east Asian nation where he halted the development of a deadly contagious virus. Or did he? I forget now. [Matador]. Anyhow, Woodrugh is meant to be investigating in da club but kinda gets sidetracked by drinking with his new rent boy buddies and will probably have forgotten by the time he wakes up about the eurotrash Tasha he was told about.

Semyon continues to not convince when talking but kinda thrill when brooding and battling. He and his wife are trying to get pregnant but he is all whiny about it and with the added stress of his empire crumbling around him, he finds himself in the Woodrugh zone failing to perform. Perhaps it's something they can bond over now that they've met (kind of) at the club where he beats the snot out of his grossly overweight former Latino associate Santos whose henchmen just stand there watching their boss getting his grill extracted. I would fire every single one of them.

That and Frank's attempted extortion of a construction buddy look like mere short-term fixes as shady 'Russian' Osip begins to move in on his turf, flirting with Semyon's wife and perhaps killing off another of their business partners. It's definitely going to get worse for him before it gets better and noir being noir, perhaps it will never get better and with a few more unpaid debts will be getting a visit of his own from a masked man...

Although very serious and dark, I feel like this show has flipped back over on itself into the unintentionally funny zone. Not the greatest hour of television going thanks to how pretentiously worded everything is - sorry Frank, I don't think Velcoro knows what 'stridency' means - but I feel like we're due for a turn in the mystery side of things and of course, Rachel McAdams is still awesome.

"True Detective" airs Sundays on HBO at 9:00pm EST.
Posted by jigenzanittou at 14:06