Semyon attempts to reclaim his criminal empire. Bezzerides and Woodrugh are each dealing with personal problems but a possible breakthrough in the case leads to a raid. 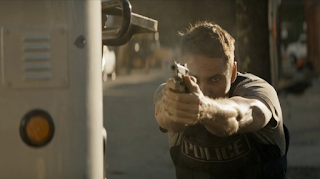 All hail the most useless SWAT team of all time! I mean seriously, what was that? It was freaking embarassing. None of the cops were wearing helmets, none of them had automatic weapons or armored vehicles. The only thing stopping Velcoro, Bez and Woodrugh from certain death was plot armor. It seems as though they weren't expecting there to be so many gangbangers on site so heavilty armed, but even so. Not the most polished performance ever seen, especially with the anti-rail demonstration so nearby. With so many civilian casualties, I am sure all three will be hauled up in front of their superiors and reamed out Abed style.

On the plus side, a meth lab run by illegal immigrant (?) hoodlums just got wiped out. How that will affect Frank is not 100% clear but presumably those guys were in direct competition with his new supplier that he strongarmed with about the same amount of subtlety as if he would have whipped out his big, floppy wang and slapped him in the face. I feel as though Vince Vaughn is pretty good at improv so is it really necessary for him to recite word for word from Nick Pizzolato's script? Bizarre and at the halfway point of the season, his character is still the weak link, almost belonging to an entirely different show.

I kept almost falling asleep during the rest of the episode so I feel like I don't have as much to say about it, especially since the investigation is going absolutely nowhere. I can look at them zeroing in on the Latino gang member and know with 1000% certainty (mathematically impossible, I know) that he is not the killer and now that he is dead of course, so goes that story thread with him. Obviously the Mayor is involved and as we've all watched Parks & Rec we can all imagine how the Mayor and the city manager could come to blows or worse. As of now though, his fortress is somewhat impregnable and none of the detectives seems even remotely competent so if he is brought down it will be from within with one of his dysfunctional children, and yes I include his new wife as one of them, who tugs down that cord.

Interesting to note that Woodrugh seems to have had a blackout between investigating at da club and waking up in Tony Bravo's bed. Of course, nothing happened because he woke up wearing his udnerwear. C'mon man. This is HBO, we are not children watching this. Obviously they did it so it's hard for me to believe they had the wild gay sex all night and then Woody pulled his briefs back on before slumbering Why is Game of Thrones the only programme that ever shows people nude during or after sex? This bothers me most on The League where I know it's FX but the dudes always have their t-shirts on in bed while bangin on Jenny or whoever. I don't think I've ever done that in my life. C'mon, man.

It's not all bad news for Woodrugh though, he accidentaly knocked up his beard so much like Jeremy Renner someone else out there, he has the perfect alibi to escape into. I'm sure this marriage will work out really well, they always do. Of course, while expressing how happy he was and declaring it to be 'the best thing that could happen' he never once smiled, the intensity reminding me a lot of AshLee Frazier's death glares.

Sober Velcoro is much more tolerable but seemingly even less handy than usual. I think he kinda nailed it himself when he told Frank he wasn't muscle although Frank disagreed, but then he seems to be wrong about a lot of stuff these days. After this weird conversation, in anticipation of his own death or maybe just his ostracization from his hot ex-wife's life, he gives his father's old police badge to his 'son', declaring "Where you come from, that'll mean something to you one day". It's the last piece of love he has to give with the fear that a paternity test is coming soon and maybe quite manipulative but having said that, I'm not sure he has the cognitive function remaining to be so sneaky.

Lastly, Rachel McAdams is still awesome but Bezzerides is still spinning around in ehr self-destructive circles too. She careens directly from delivering a judgy pout to her sister for the shady webcam stuff to pretty much being slut-samed by IA. I doubt she can see the irony in that situation despite previously connecting how messed up the Mayor's daughter is thanks to her father with her own situation. By the end of the shootout at the end of the episode she seems by far the mos traumatized which dos't bode well for the investigation given she was the only one who appeared to have a vague idea of what direction they needed to be tunneling in. I'm thinking her super eerie father is involved in some convoluted conspiracy with the Mayor and Frank's rival Osip and hopefully once she gets her shit back together she'll start hitting back at him leading to a mass suicide at the commune kinda like at the end of LA Confidential. Will I still care by then though? Hmmm.

"True Detective" airs Sundays on HBO at 9:00pm EST.
Posted by jigenzanittou at 14:10