Velcoro relapses while Frank is doing his job for him and Bezzerides infiltrates a sex party with mixed results. 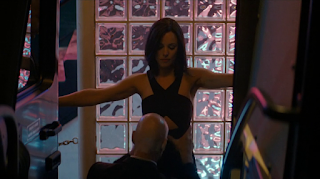 I usually write a whole bunch of notes while I watch these shows so I can touch on them later but my pad was blank this episode. These people talk and at this point it's all just yada, yada, yada. None of it matters. It wasn't the most terrible episode of all time though which we'll get to later.

First up though is weak link Frank. In an incredible twist that no one could possibly have seen coming, Frank got outmanoeuvred yet again! As predicted last week, the stand off between Ray and Frank turned out to be very anti-climactic with absolutely nothing being confirmed or resolved. Somehow, the end result of this talk is that Frank now has to do Ray's job investigating this girl who no one watching this show can remember the significance of.

After visiting the kid of the late Stan and giving a very heartfelt, meaningful speech - at least, I think it was meant to be very meaningful - and then moved on to torturing some poor random Latino guy. None of it makes any sense, least of all when he finds himself in a standoff which a group of other Latinos who I feel I am supposed to know but they put him in touch with another random woman who calls Semyon on the phone.

I just assumed they got their cousin or someone to call and pretend to be this girl Irina he is searching for, but supposedly it was the real deal. Well, until they butchered her anyway. I'm as clueless as to the why as Frank. One thing Irina did mention before biting it was that she had received Caspere's items to be fenced from a thin, white police officer. Woodrugh, anyone? It's still possible even though he was the one tracking the blue diamonds.

After getting no closure whatsoever from his meeting with Semyon, Velcoro has an incredibly awkward visit from his son where he seems to drown in the reality that he has no idea how to connect with the kid at all. One alcohol and cocaine fuelled binge later, he is ready to admit that he likes the idea of being a father far more than actually being a father and cedes full custody to his ex-wife Blah Blah rather than face a paternity test. It's sad to see him give up and part of me thinks he is about ready to die, Jack Vincennes style. It crossed my mind during his bender that he was trying to get arrested and thrown in the slammer with the Real Rapist, although of course that's silly, it would never happen like that.

At length, she stumbles upon a missing person who might be able to connect the dots between some of these power players and on their way out she kills a guard. I am pretty much 100% certain this will blow back on her with her sister being killed or at the very least maimed seeing as she used her name. Ninja!Woodrugh also stole a bunch of contracts from Osip which I'm sure he won't notice are missing. I think he needs to hire better bodyguards because even though it was night out, they were just the worst shots imaginable as two desperately out of it girls made their uncoordinated wobbly run for it.

While studying the contracts, our detectives apparently are just now starting to realize how complicated. Which is a shame because complications probably involves a lot of these people talking and I think they should just focus on the action since all of the dialogue is so stilted, contrived and overly complex. Once again, especially when Ani and Woodrugh met with the sheriff at the scene of unidentified crime scene #17, I wished I was watching Justified - a self-aware show with a sense of humor which this most certainly is not.

"True Detective" airs Sundays on HBO at 9:00pm EST.
Posted by jigenzanittou at 13:48