Time has passed since the Vinci shootout and everyone is struggling to move forward in their new realities. 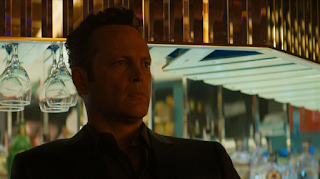 Despite all the bombshells dropping all over the place in this episode, well okay, maybe it was only one, I once again struggled to keep myself from napping. The tone of the show is just so enormously dull. At the very start of the episode when the HBO logo flashed I already wished we were about to transition into the Sopranos. While the episode was playing I began wishing I was watching Justified instead. But no, I was watching this so I guess I have to try and find something to say about it?

The major reveal is that it appears Semyon set up Velcoro to go after the wrong guy. I always thought it was that the supposed rapist that Ray took out was not a ginger, so where did the ginger come from? Now it all makes sense! Ray's ex-wife Alicia pointedly intimates that his desire for vengeance directly led to their marriage. I'm not sure how true a statement that is but it doesn't really matter because Ray is not going to think much about that and go straight after Frank.

If there's DNA evidence then we can reliably confirm the guy just caught is indeed the real rapist and the poor sap Ray murdered was not connected, so the question is did Semyon set him up or was it a genuine mistake? We are led to assume the former with the wrongfully killed presumably being an obstacle to Frank but I'm sure he will try to plead ignorance. Surely he must have guessed that at some point the real culprit would be found? If Velcoro was willing to go outside the law in the name of revenge once, how would he react to the betrayal?

In the present day it seems that he took out all his anger on psychiatrist Pitlor and by the time he shows up at Frank's door, he might not have his game face on. Being sober, perhaps, might help him sort through this next confrontation in a more subtle manner. With the two month time jump, Ray has quit the force under somewhat of a cloud of suspicion to join Frank's employ so he can't really go back. It's unclear how aware he is of Frank's crumbling empire so dare he move against him? My guess would be in an attempt to justify his own existence he will be open to being swayed by whatever excuse Semyon comes up with.

For Semyon it seems that things have only been getting worse with he and his wife having boxed up their house ready to leave. The performance continues to be stilted though and I remain unsure of the intent behind the character. Even though Ray has openly switched sides now, Frank's story still remains apart, a completely different feel from the rest of the happenings. Random bursts of violence aside it is still tough to take him seriously having never seen him in control, especially when he is being threatened by midget Heisenbergs. 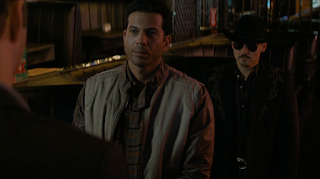 Good ol' Bezzerides (Rachel McAdams) falls victim to the cringeworthily overwritten Pizzolatto monologue this week in her sexual harassment seminar. I'm starting to wonder if this entire show is a prank to see how many world famous actors he can get to say utter nonsense on TV? Much like Daniels in the Wire she has been shuffled off to Evidence Control as punishment for her misdemeanours but continues to investigate like a, wait for it, True Detective!

She has also taken to spending her nights drinking in the same dive bar that Velcoro frequents with the same sad performer singing to no one. All signs with her are pointing towards moral devastation, especially now that she has sent her sister to track down one of these weird sex parties for her to infiltrate. I'm sure that somehow, considering she just got into college, that this proves a gruesome death lies ahead in the very near future for her sister.

Of course, no one believes that Amarillo and the rest of the illegal aliens were in any way responsible for Caspere's murder. Much like LA Confidential and other classic noir, our leads remain obsessed with uncovering the truth much of it no doubt fuelled by drug and alcohol induced paranoia. Some may emerge on the other side with commendations and gold stars but no happiness and ruined families in their wake.

Woodrugh came out on the other side of the most atrocious shootout in LA county history which mysteriously barely gets mentioned with a sweet promotion to detective with a desk job but that apparently is still not good enough for him so he needs to go find the money he hid in his loonball mother's trailer that he acquired under mysterious Three Kings style circumstances which of course is all gone because that was a terrible idea to begin with.

Later he has dinner with his new fiancée and a future in-law and could not be less engaging. Which was kind of the whole point of that scene but I've always wondered about this guy. Riggins was never my favorite character unlike apparently every single other person who ever watched Friday Night Lights. For some reason he is looking into the case of these blue diamonds which I'm not sure are actually a thing, it sounds like blue meth which is not scientifically possible but anyway, I have no idea what the significance of them is or who they connect Caspere to and I don't really care all that much because this show has gone completely off the rails. The End.

"True Detective" airs Sundays on HBO at 9:00pm EST.
Posted by jigenzanittou at 11:34