The remaining crew plot their escape but there are still loose ends to be tied as the net closes around them... 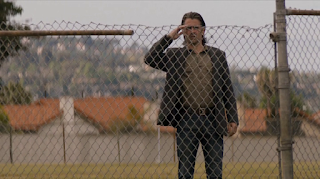 Spoilers after the jump

So of course my first thoughts after that are "Thank God that's over with" and "How soon can I delete this from my DVR?". Actually I would say the finale was a slight step up from most of the preceding episodes, though still patchy and inconsistent and there was definitely an audible groan in the room when I realized the episode was half an hour longer than usual. On the whole, I am not against ambiguous, non-committal endings so I was fairly satisfied at the end.

Let's get the bad out of the way first and that is of course anything involving Semyon. It was no surprise whatsoever that The Most Incompetent Gangster Ever failed one last time bleeding out in the middle of the desert after some frankly ridiculous and meaningless hallucinations that took away from the rest of the episode, as out of place as they were.

So you have this guy who has just burned down two nightclubs, going against the main local underworld power but he is still strolling around in his best suit driving his ritzy town car around as though no one at all is looking for him. He casually lollops into the Mayor's mansion, yes that Mayor, the one whose son is spearheading the town conspiracy against him. I'm not really sure why he went there but he finds the incumbent face down and dead in the pool which I guess is a bummer? Not really, I don't care actually. I just feel sorry for Vinci because of who replaced him.

Although! I presume the Mayor is a publicly elected position in Vinci, I'd imagine that's so. Given the choice between the entitled rich kid wannabe gangsta son of a possibly corrupt, obviously sleazy former police and anyone else in the entire world, the people of Vinci voted for Tony Chessani? Really?? You know what, they got what they deserved. I suppose it's possible he ran unopposed but that would just mean that the locals are spineless on top of dumb.

Frank sends his wife off to Venezuela first without him and she tells him that he can't act for shit when he pretends to break up with her which is kinda harsh, but based on the evidence of Vince Vaughan's performance this season, well... He retorts that he can't run because it'll never stop although as she pointed out before, it was already over and he is just lashing out. Anyhow they part and when Semyon later asks Bezzerides to pass a message along to his wife, you know for sure that his card is marked.

Frank and Ray's two man assault on Osip's log cabin that night is uncharacteristically masterful, going off without a hitch. It leaves me wondering what the writer's intent with the character was. It is one to thing to craft a flawed individual, one with certain strengths and weaknesses. It is quite another to create a cipher who we're told is very successful but are given no empirical evidence at all of this until one isolated sequence in the final episode.

Then of course, because he is being so conspicuous in his suit and town car, he gets ambushed by a bunch of dudes who it took me a few minutes to clock were from Danny Santos's gang who he had (incompetently) struck a deal with a few episodes back. They drive him out to the desert, it goes badly, he gets stabbed and dies. We won't discuss the hallucinations because they were so silly and not at all poignant. RIP Frank, I am content in the knowledge I will never see you on TV again. 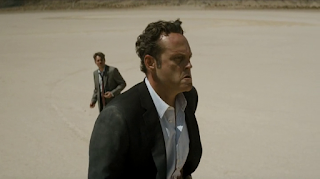 So it's the morning after the night before for Ray and Ani and they are sharing their experiences of rape with another, as you do. The way she is talking about her molestation as a child, how she felt proud to be pretty made it seem analogous to her hookup with Ray, suggesting a man taking advantage of a woman in an emotionally fraught state. It was probably an accident by the writer though, no doubt he thinks this is the greatest love story of our modern time.

After learning of Woodrugh's death, they are keen to press on and solve the case and somehow remember a dude from the film set that I guarantee no one in the viewing audience does. Not only that, they make the connection with the other girl no one remembers who worked for Caspere and who both turn out to be the orphans of the diamond robbery. This again seems very inconsistent with their displayed abilities as investigators but we're almost at the finishing line so I guess we'll let it slide.

It turns out her brother Lenny is the Crow which feels like something the writer added to the early episodes to give the visuals a bit of oomph but forgot to tie it all back to the narrative in a cohesive manner as it all lacks inherent sense. Velcoro's picture is circulating all over the news as the alleged murderer of Davies and Woodrugh so he needs a disguise. Naturally, he opts to not cut his hair or shave and had movie star shades and a ten-gallon hat.

Somehow, no one notices this and he makes it to the rendezvous and intercepts Lenny. He chats up Chief Holloway in a sting that he and Bezzerides cooked up on the fly but it goes south when it's revealed that Caspere is Lenny and his sister's real father. Lenny jumps on Holloway, attempts to knife him to death and the incompetent cops in Holloway's pocket shoot both of them and miss Ray entirely who escapes with Ani's help.

With their case now busted, they pretty much have no choice but to go along with Semyon's plan to pose as a folk singing band from Salt Lake City raid Osip's money transfer and flee to Venezuela. To ensure the embers of their investigation remain alight, Bezzerides is left behind to be sent away first. Ray, much like Neil McCauley in Heat makes the critical mistake of going back for him to see his son one last time. 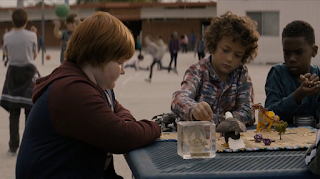 Ok, I can't help but think it's super weird that a kid is carrying this block around with him all day at school. But this was a great scene, the best of the entire season and notably wordless. It summed up the arc of Velcoro in a very poignant style. Here is the appropriate song.

Caught out by the cops, Ray beats a hasty path north in his car and tries to send his son one last voice message, but makes the grave error of driving into the woods where you can't really expect there to be adequate cell coverage. His pursuers seemed like they wanted to drag some info out of him but he must have been on a whiskey, hookers and cocaine bender the night before because he shoots like a G, taking out two guys before he is sadly caught up to and filled with bullets. 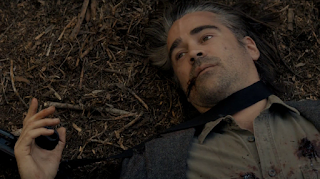 RIP Ray Velcoro. At the end of it all you came good and were interesting. Bravo Colin Farrell.

That leaves Bezzerides (Rachel McAdams) and Jordan Semyon alone in Venezuela. As if anyone doubted with how telegraphed everything else was that Pizzolatto would have the guts to kill off one of the female leads. Production found the most adorable baby to be ever on TV to act as the very important and inevitable offspring of Ray and Ani. With Ray's ex-wife Blah Blah having gotten the paternity test results back, it turns out he was two for two so he can take that to the grave with him. It's still a mystery as to where the ginger came from.

This was a disappointing season of television but the denouement was satisfactory. The machine rolls on but the fight will always continue. It's a cynical viewpoint I can get behind and not be totally turned off by the idea of a third season being developed by this writer. 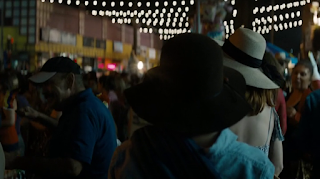