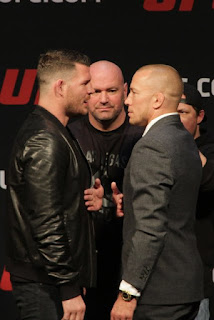 I was thinking about ruminating on why MMA fans seem to be overwhelmingly conservative in nature but then big fight news came down this week as Georges St. Pierre's return became official as he challenges Michael Bisping for the Middleweight title at UFC 2??. Well, most likely UFC 213 during International Fight Week in July. Plenty of people are complaining but I don't hate it and am looking forward to the fight.

The chief grievance most people have is that this feels like a gimmick, money fight rather than one based in actual sporting intrigue given that GSP has not fought in three and a half years and has never competed at Middleweight. They have a point there but the inference that WME is interfering in matchmaking to pay off the vig and that this would never have happened under the reign of the Fertittas is risible. Anyone remember when Chael Sonnen got an undeserved shot at Jon Jones? Brock Lesnar had the name but not the credentials when he fought Randy Couture. Multiple fighters have been handed title shots coming off losses. While technically under the WME banner, there was also a rather large event at Madison Square Garden where a a very popular fighter got a shot at a belt with a grand total of zero wins in that division in the UFC that no one complained about that you just know old Zuffa would've been all about. So it's not unprecedented.

Moreover, I don't feel bad for Yoel Romero. Is he the clear number one contender? Sure, I guess. But he's also extremely lucky not to be in the midst of a two year USADA suspension. There was highly unethical conduct by his corner in the Tim Kennedy fight and also repeated fence grabbing against Jacare Souza which saved him from being underneath a BJJ warlock. So it's tough for me to muster a lot of sympathy. While there is also grumbling about a logjam being created at Middleweight - a logjam of two, by the way - it wouldn't be the worst thing in the world. Better than what you have at Women's Bantamweight which has no clear challengers after Valentina Shevchenko. There's a real complaint you could hurl the UFC's way which was also evident under the old management - would it kill them to book a few more women's fights?

Read more »
Posted by jigenzanittou at 01:11 No comments: