UFC 211 Picks and some thoughts on Man Utd 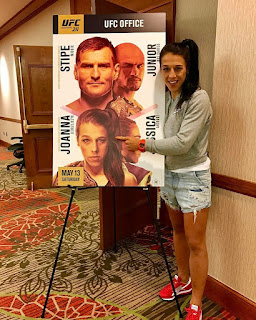 We are geared up for the best card of the year with UFC 211 stuffed full of meaningful fights. It has been three weeks since the last UFC event and absence has made the heart grow fonder at least here. The news has been a little slow but I do have two random things on my mind.

First of all, I've become irrationally convinced that Jose Mourinho is low key trying to ruin my life. That has nothing to do with MMA or Shenmue or anything but our Manchester United side has been absolutely dire by their standards in not just recent weeks but in fact recent years!

I heard people talking the other day, asking the question "If United don't win the Europa League, would this season be considered a failure?" Forget that, I say, even if they do win the Europa League the season is already a failure. Manchester City and Arsenal have grossly underachieved, Liverpool have been a barely above average side and somehow all those teams are ahead of us in the league.

To make matters worse Tottenham, who will for sure embarass us in the last ever game at old White Hart Lane, have stolen a march on us at a time where we would have otherwise hoped to pry away key players from their squad like Harry Kane and Eric Dier to augment our own. Failure to take the initiative in our own games has allowed our competitors to strengthen their position against us.

The game on Thursday against Celta Vigo, a razor thin 1-1 draw on the night was so typical of the inefficacy of the team this year. After stumbling out of the blocks and allowing Vigo to dictate play early in the match, United finally settled in and started to knock the ball around with confidence leading to our goal, a header from Marouane Fellaini. But after that, United sank further and further back showing less and less ambition.

Vigo's equalizer instigated full-scale panic because barely a soul in the side has a spine. Athletic lugnut Eric Bailly unwisely shoved his hands in some diving prick's face and got himself sent off. When play resumed, Rooney promptly ran the ball up to the corner flag in an attempt to waste time. Against Celta motherfucking Vigo. Are you fucking kidding me?

I'm not inspired by Mourinho. I'm still irrationally convinced he will win us the league out of nowhere next year but I don't think he'll last much longer beyond that. In the meantime, he will have driven away all our promising youngsters and homegrowns, in particular the beleagured Luke Shaw and no doubt leave us right back where he started from. He truly is a desciple of van Gaal in that respect. To Stockholm we trudge then.

In lighter news, Paige VanZant apparently caused quite the stir when she posted a suggestive video of herself showing off her Reebok undiepanties imploring her followers to buy a set for their sisters or girlfriends. In full disclosure, when I saw the video free of any context (not that there was much to begin with) I believe I exclaimed out loud, "She's gone completely batshit insane!" but as a born contrarion once the criticism started pouring in I started to feel a paternal or perhaps hot-girl-privilege inspired need to defend her. Not that I did that but I would note that yes she is a hot girl and yes that does mean she gets a pass. That's just how it is. I know Angela Hill is a critic but shehas made some odd videos herself in the past but they're not nearly as effective because she is not hot leading me to believe the hate is borne from either jealousy or angry, frustrated virgins. That's how I see it anyway.

Read more »
Posted by jigenzanittou at 13:58 No comments: