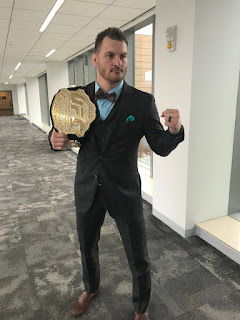 Heavyweight Champion Stipe Miocic has cleaned out four consecutive opponents in the first round and seeks a record breaking third title defence against one of the most hyped Heavyweight prospects of all time. "The Predator" proved his championship credentials with a knockout of the year contender over Alistair Overeem at UFC 218 in Detroit and the recent history of both men points towards a first round finish.

I don't think Ngannou is quite the unstoppable force he is claimed to be. His endurance has never been tested and no one has really challenged him with any kind of varied striking. A lot of that is down to how shallow the Heavyweight division is and how artificially accelerated his ascent has been. Overeem, meant to be his toughest test, had fought with a more intelligent style recently but completely flopped against Ngannou.

Stipe has the technical skills and awareness to land on the challenger. The problems are that first of all Ngannou is huge, bigger than Stipe which is a common occurrence and unlike most Heavyweight stars, at his absolute peak physically. Stipe may consider using some of his underrated wrestling but Ngannou is so athletic and powerful that he can negate gaps in skill.

Ultimately my feeling is Miocic gets hit too much. Junior Dos Santos landed in Stipe's last fight at UFC 211 and Overeem knocked him down before then at UFC 203. I think his chin is proven suspect and with Ngannou it only takes one. I don't think the Predator's reign will last as long as some may forecast but I do think it begins with victory here. I also think the UFC should ban Ariel Helwani for life (again) because it's possible he killed any chance Ngannou will become a big fan favorite by goading him into speaking ill of Donald Trump. Ngannou should've taken a leaf from Nick Kyrgios's book.

Oezdimir gets a title shot despite facing felony assault charges so it could get awkward if he wins here but I don't think that will happen and it really shouldn't. Volkan has caused a stir by winning his last two against highly regarded opponents with flash knockouts. Against Ovince St Preux, his overall game was just okay though and against someone like DC who can take a shot, it figures to be exposed.

I expect Cormier to be able to get in close, take Volkan down and wear him out. The finish will come sooner rather than later and next up will be a Gustafsson rematch which will be a significantly more difficult fight to handicap.

With two huge fighters at the top of the card, the UFC takes the opportunity to showcase some lesser known fighters. It's a move that is much derided by those hoping for super cards but it might behove them to save some big fights for nights sporting a weaker main event. I bet for example they would have something better for UFC on FOX 28 than Jeremy Stephens vs Josh Emmett.

Burgos is an exciting prospect who walks forward and boxes with power. Large for the division, he hangs his chin out here but has good movement and can take the hits without wincing. Kattar will be the hometown favorite. He is a veteran with good experience in the sport but has not been so active in recent times.

This figures to be a close range slugfest between two similar punchers willing to fire at the right opportunity. At 10-0 Burgos has undefeated mystique and is surely someone to watch in the future. But Kattar is intelligent, well-coached and great value as an underdog. I think he scores enough points with leg kicks and smart counter-striking to earn a  decision win.

I would say I'm not sure how Gian Villante is still ranked but that's testament to how weak the Light Heavyweight roster is. I suspect at heavier weights guys are too in love with their power to be bothered with developing technique. There's nothing Villante does really well but his striking is competent and his takedown defence is good enough. I think Barroso is just about done and Villante should have enough to outpoint him and perhaps even get a finish. I'm actually not sure how this makes the main card other than the fact Villante is a buddy of Dana White.

This on the other hand, despite both fighters come off a loss is a great fight that I'm looking forward to seeing. It promises to be an all-action banger between two guys who swing with abandon. I think Almeida lost a lot of his swagger when he got knocked out by Cody Garbrandt. To me he doesn't look as confident and it showed in his last matchup, a decision loss to the reliably boring Jimmie Rivera.

As much as they each walk into danger, I'm reminded that Rob Font survived three rounds against John Lineker. I think he comes out inspired and lands enough to hurt and put away the technically more fluid fighter and get a big win at home.