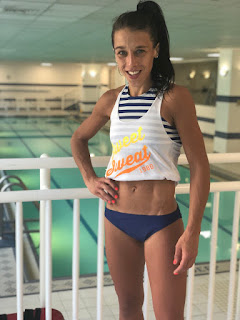 I like Raging Al a lot but I think this is a tough spot for him. He has the power and unorthodox style to cause trouble for anyone but the way Khabib dominates opponents on the ground is tough to overlook. Once the fight was officially announced late yesterday, Khabib opened some places as a sorely overpriced -1050 favorite and even with bettors chasing the value is still vey dear. In this case we're only worried about who wins the fight and we think Khabib will be better prepared for what Al brings than Al will be for Khabib

After losing her Strawweight crown to Thug Rose - by the way, a fight made thoroughly unrewatchable thanks to a certain commentator's screeching at the conclusion - Joanna proceeded to blame everyone under the sun apart from herself. In the days running up to that fight I became very nervous the more she acted out. By the time she got into the octagon and was mean mugging her opponent I knew the karma was strong and she would go down hard.

Regardless of whether mistakes were made by the people around her I don't think the approach Joanna is taking, at least publicly, is correct. When things go wrong, accept the responsibility yourself and ask what "I" can do better next time. It makes the past easier to accept and the path forward clearer.

Firas Zahabi in his break down of the fight noted that the way a Muay Thai fighter matches up with a boxer is very disadvantageous to the Muay Thai fighter without modification because it leaves them open to being punched in the face over and over. It's something we've seen repeatedly happen to Doanld Cerrone and it happened to Joanna when she fought Rose the first time at UFC 217 last November. The way she talks I don't think Joanna learnt the right lessons. It's very difficult to break patterns that have existed over the course of an over decade long career in fighting.

Before she fought Jessica Andrade I prophesied doom for Joanna who had mentioned the dreaded "R" word - Retirement. She prevailed easily on that occasion but I think this loss is in her head now and will prove her downfall on top of the stylistic deficiency. It's a real shame because she was a great champion and I was anticipating an MMA rematch with Valentina Shevchenko down the line.

For Rose Namajunas, she has gone from Bill Simmons proclaiming a movie should be made about her to fading away and being completely being overshadowed in her own title defence. I think she is just a very low key person who prefers it this way but a lot of people really want it for her. As I said before, it won't happen until she grows her hair back. It's just the way it is.

It's really odd the UFC has taken to putting these kind of no name matchups in a money slot on the PPV. This isn't a rave, it's not a choreographed production, we should be looking for all rise. Moicano has good skills but is completely unknown despite outpointing Jeremy Stephens on the main card of UFC on FOX 24. He was beating future UFC champion Brian Ortega on the feet in his last fight until he made the indescribably stupid decision to change levels and shovel his neck directly into Ortega's guillotine.

Kattar has high fight IQ and is comfortable both zoning and slugging at close range. I think this one could be razor thin but Kattar's decisive advantage in gameplanning will see him on the right side of the score cards.

This fight was promoted to the main card after the incident Thursday. I won't talk too much about it. I'll take a leaf from the book of some radio hosts in America who now refuse to name or glorify mass shooting perpetrators. I don't have an awful lot to talk about this fight either. Bochniak is alright but nothing special for this level. Magomedsharipov is a blue chip prospect and an elite finisher. This will be a good showcase for him to make a name for himself and I expect him to win comfortably.

This bout was promoted to main card after all the shenanigans with NYSAC on Friday. The New York commission is making quite a name for themselves in regard to their obduracy but even as messy as pulling Max Holloway from the main event for "Reasons", refusing to sanction Paul Felder due to the UFC's bogus official rankings and the inflexibility on weighing in, I don't think anything will ever beat pulling Pearl Gonzalez from her fight last year because of her fake boobs.

I didn't look closely into this fight. Lauzon has struggled for wins lately but he has generally been matched up against other experienced and decorated fighters. Gruetzemacher seems like a guy who never really adjusted to the level of the UFC. I think Lauzon's experience will see him through.