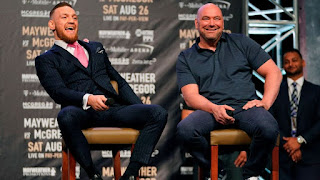 This is the only fight on the card that really matters but man is it a good one. The first fight was highly enjoyable. The heat of the rivalry has faded and it was probably too soon to do a rematch but beggars can't be choosers.

It's also terrifically difficult to call. In their first official meeting, Garbrandt shaded the first round and knocked down Dillashaw. The Duane Ludwig protege rallied in the second, finding his rhythm and finishing hos opponent. I suspect that second round is more indicative of what we'll see here.

Garbrandt is very orthodox with his striking. There is probably not much of significance he can add at this point and still retain his feared power. On the other hand, Dillashaw's movement and angles can flummox in the heat of battle. With his fluidity, now that he found his range and knows he can slide in and out and hit him, I think TJ carries that confidence into this fight and wins, probably with another finish.

True trilogies are rare and for a reason so the odds are against Garbrandt a little but I certainly think it's possible. If he wins, I think it will be Marlon Moraes next for him. Or of course, that trilogy. But we all expect buy rates to struggle to crack 200k for this event so it might be worth sitting on that idea even if it comes to pass.

It's very difficult to pick against "Mighty Mouse" versus any other Flyweight until he shows deficiencies. Cejudo is easily the best and most deserving contender in the chasing pack and has shown consistent improvement but not enough to make me think he can beat Johnson. Many of Johnson's recent triumphs have been wrestling heavy which you'd think might give an opening to the former Olympic gold medalist Cejudo but in their first meeting Johnson worked him over in the clinch and struck the decisive blows from that position.

Cejudo was struggling badly with his weight cut at that point in time. He seems to have it more under control now which should help his endurance and ability to survive those elbows, Johnson not typically a power striker. I think it goes the distance and is fairly competitive but obviously in the end, Johnson wins and retains unanimously.

It's worth nothing that every time Demetrious Johnson has fought someone for a second time he has won decisively. On those three occasions he had serious trouble in the first fight and it would be tough to win more definitively than knocking out Cejudo inside a round the way he did at UFC 197.

"Mighty Mouse" ought to be looking for something new after this as there are no other viable contenders. While undoubtedly ludicrously talented, the lack of depth and challenge at Flyweight makes it difficult to take him seriously as "The Greatest of All Time". It's been discussed before about the possibility of a super fight between him and the Bantamweight champion. I really think he should be the one to go up in weight. It's the division from which he came, he is the one in need of a challenge and he is the one who has earned the right to win a second belt.

Renato Moicano opened as a big favorite and the gap has just continued to widen with good reason. Cub Swanson is washed up. We noted before that his return to prominence was something of a mirage. I called for a match with Brian Ortega because I knew Ortega could beat him. The only semi-credible name he fought on his recent win streak was Doo Ho Choi who was rushed in to a big fight too soon, a common theme.

Moicano is a technically excellent Muay Thai striker who out pointed everyone he has danced with, including Brian Ortega until he went full retard and stuck his neck in the crook of Ortega's elbow. Cub has some tricks, but not the kind that should hold Moicano from winning comfortably.

I think of these two I have watched one fight total while half asleep and don't care to go back and check. Sometimes I like when they put a women's fight on the main card to try and promote the divisions a little but there is very little justification for this one.

I guess the idea is that Viana has been a finisher in her career, able to finish scrubs of which I think we can safely assume Aldrich will be one. But you're trying to sell a Pay Per View on which you've raised the price. Is this going to get people's blood pumping? I severely doubt it. As I said. They don't care so why should I?

This fight I suspect was promoted to the main card after various matchups involving Alexander Gustafsson fell through. I was looking for a substitution in this matchup also as i find it a little odd that Thiago Santos who can still bang would be matched up against a debuting fighter who had to go through DWTNCS to get a contract but that is the modern UFC for you. It's a good opportunity for Holland, a consistent finisher on the regional circuit, to make a little name for himself but I still for now at least, think the veteran Santos should be able to see how the young blood.