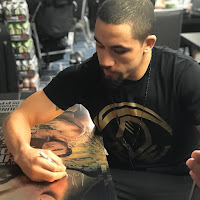 A rematch of their interim title fight at UFC 213, Whittaker and Romero meet for the full title in Whittaker's first defense. He was originally meant to meet Luke Rockhold in February but withdrew due to injury. Romero stepped in on short notice and stole the shot although he missed weight on that occasion so the UFC technically had an out if they did not want to book what is effectively an immediate rematch.

Despite losing the first two rounds at UFC 213 and limping around for most of the fight with a sprained MCL, Whittaker cruised to a unanimous decision win in the final three rounds. Once he had a grasp of Romero's timing and patterns he was able to pick his spots and lines of attack. Romero was also unable to control the Antipodean with his wrestling. I quite like Whittaker to keep the momentum going, jabbing away at Romero and wearing him down. I'll be honest, it's not the most anticipated fight of the year for me. Despite this being a title fight, I think there are more exciting bouts ahead for both.

I won't spend too long on this because the guy who is not Rafael Dos Anjos does not deserve the coverage. Unfortunately he is going to win this fight and have a belt strapped around his waist. This is an ideal matchup for him - there is a reason he started calling out Dos Anjos the instant the Brazilian moved up a weight. Expect this to look a bit like the Khabib Nurmagomedov vs Dos Anjos fight except with less ground strikes. Everything the other guy says about getting a knockout is bullshit and a lie. There will just be a whole lot of stalling because he doesn't have many ways of finishing.

Anderson is a very promising prospect and fun to watch striker who does not mind being the aggressor which is good news for the watchability of this fight. She was meant to be making her UFC debut around a year ago against Cyborg for the Featherweight title but withdrew for mysterious reasons she refused under any and all circumstances to disclose. There were many rumors flying around ranging from Visa issues to pregnancy but the most plausible explanation seems to be USADA related.

In any case she finally gets a chance to prove herself against Holly Holm. On the one hand I can understand not wanting to throw her to Cyborg too soon and have her get demolished and have no future in the division. On the other, Holly Holm is no mark. Frankly they would have been better off keeping Cindy Dandois around - Anderson has improved significantly since her first meeting with the Belgian - she seems a quick and willing learner - and a shot for revenge would make a good storyline.

Anderson is very powerful but in her career has only fought low level competition. Her toughest opposition by far came in her last fight over a year ago in the form of journeywoman Charmaine Tweet who touched Anderson quite a few times. The only strikers Holm has lost to in her MMA career have been women with a lot of professional kickboxing experience. She is a lot harder to connect on than most women in the upper weight classes and was not knocked down in five rounds by Cyborg. I think Holm will edge this with counterstriking and superior tactics. If that's the case it will hopefully trap the UFC into making Cyborg-Nunes next.

Since switching training camp from Jackson-Wink to American Top Team, Arlovski has engineered a mini-revival of fortunes. Against some admittedly inferior opposition, he has been better able to zone and protect his suspect chin. He will need all that skill in a matchup against knockout artist Tuivasa, a kickboxer and training partner of Mark Hunt.

I think there are several factors working against Tuivasa. To begin with, this will be his first time fighting outside of Australia. The guys he has beaten so far in the UFC are total marks handpicked specifically to lose to him. All of his professional fights have ended in the first round so someone like Arlovski who might be able to frustrate him will test the fat man's cardio and heart.

While there's certainly a great risk that Tuivasa could just throw hard and end things earlier, he can also be very undisciplined both in and out of the cage. He has a tendency to rush in and load up which an experienced kickboxer like Arlovski should in theory be able to capitalize on. So now that I have picked Arlovski to win for the first time in a very long time, you can certainly expect him to get wiped out in under a minute.

I know basically nothing about either of these guys as fighters but overall I feel there's not that much to know. With no tape to speak of and sparse experience, it will come down to fundamentals and who is more practised in their techniques. Now that the air of novelty is off "Phil" I am kind of doubting his PPV draw power to boot. Jackson opened as a favorite, has spent longer training in MMA, is younger (?) and presumably has had fewer concussions so I will pick him. Add on to that the distractions Punk has faced with a civil lawsuit against him concluding in the immediate leadup to the fight. Even if he wins, I don't know what is next for him. Can they really just keep bringing in no-level opponents just specifically for him?