Liz and Kenneth are hot on the trail of Tracy while Jenna is filming a new horror movie. 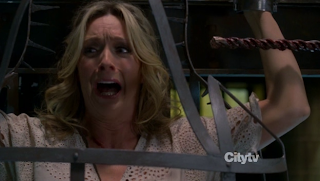 Liz's chase of Tracy was enjoyable without being overly taxing. With Tracy now found (finally) and the promise of insane antics to come, it looks like there will be an explosive finish to the season coming up. On the other side, Jenna's storyline for once this year was the strong point rather than the opposite! Of course, it had Jack heavily infused in it, and what a stroke of genius it was. The over the top Connecticutization and commercialization of the torture porn movie "Slaughterface" is exactly the kind of thing that can actually happen to legitimate projects. I would watch "Who Nose?" though, it looks better than nearly everything else NBC has. Pete's arm-wrestling thread turned out be all a dream which was kind of annoying - I never like it when a show hides story elements so blatantly, it feels like cheating - I'm talking particularly about the time lapse between Pete beginning his day dream and the point at which it ends. I probably should have been tipped off by him beating Jack and Jack just accepting it though. It's been a rough year for Pete, but it seems at least he still has belief in his own basic character.

Not much to say this week, not because it was bad, quite the opposite. It was just over the top fun only this show with its established universe could pull off.