Blair attempts to date Prince Louis while Serena and Charlie desperately attempt to seek out proof that Dan and Blair are having an affair. 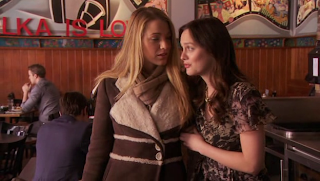 Serena is often accused of being selfish but it really did show itself this week. After jerking Dan around so much in the past, it's amazing how jealous she gets at the notion he might be seeing someone she knows. First she sics her new lapdog on Dan to stalk him, then later casually cuts down Blair refusing to accept any of her explanations or apologies. The title truly applies when Serena starts whining about how Blair wanted Dan because Serena he "belonged" to Serena (Paraphrased, but still, HUH?). Of course the reverse is always true. With the exception of Chuck, pretty much everything Blair has had or wanted, Serena has been able to shamble on in and take for herself. She gets away with it because she's usually lovely and charming but this was not her finest hour. Now that Charlie seems to have her eye on Dan, more conflict could be about to bubble to the surface. Maybe Serena will be led to a realization about the guy.

Speaking of Charlie, why was she staying again? To do what? 50% lounge around, the other 50% spying for Serena apparently, it seems she has nothing better to do than use the family money. Not to cast aspersions on actors I'm not familiar with, but either Charlie is either really uncomfortable and out of place or Kaylee DeFer is off the pace and out of her depth. I would say the character is hard to watch, but of course that's not true, she's really pretty. I can't say the same about the Prince. Outside of maybe Ed Westwick, this series is not well known for its acting but Prince Louis is especially wooden. It could just be the terrible accent of course, but it seems there's about as much to his character as there is going on in Serena's head.

The plot with Dan and Blair pretending to be a couple to throw the scent off for the benefit of Louis' handlers was preposterous but fun. The high farce played out very well at the party of the week fundraiser in the Lily's apartment. There was also the priceless and sublimely condescending moment where Serena tells Charlie "Aww you've met sooo many people in such a short amount of time!" while caressing her hair like a little child. After the eye-fucking they did at the family portrait though, I'm pretty sure Charlie could recognize Dan anywhere. She's apparently set to become friends with Vanessa who got coldly brushed off by, well, everyone in this episode. With Blair and Louis going public about their burgeoning romance now, I wonder how Chuck will react?

The man himself was mostly drunk but still alarmingly slick this week as he probed the mystery of Raina's mother. This looks like pretty much a carbon copy of the where is Chuck's mother? plotline of last season, especially with Jack Bass returning next week. Chuck's mother was reported dead by Chuck's father but turned out to have been paid off to leave. One has to wonder if the same thing happened here, with Raina's mother having been paid off to leave by either Raina's father or Bart Bass. One has to think this way because they surely wouldn't introduce the "fake" mother this week if it wasn't actually her, right? I'm rooting for that to be subverted personally.

Lily getting trolled by her high society pals was just sad. I had to think and think when I saw Nate's mom wondering who the hell she was because I was certain I had seen her before on the show but couldn't figure out where until she started talking about the Admiral. By the way, what happened to that guy? He just disappeared, shouldn't he be helping the totally useless Nate with his Raina problems, or something similar? You can't just set him up and then totally abandon his redemption. Last word on Dan disowning Vanessa - I hope he's still able to remember from whence he came, the touch of the common man is what gives him most of his charm. It's certainly not his fli-flopping over who he loves most.