The gang select their spring electives, with Jeff and Pierce taking up wine tasting and Britta and Troy trying out acting. 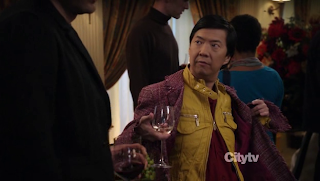 Well it had to happen eventually: an awful episode of Community. First up is Jeff and Pierce's storyline. Just on the face of it, so, so racist. Chang works as a jackass butt-monkey without playing up to established television stereotypes (although there is a disturbing trend developing between Ken Jeong and C.S. Lee where they take on terrible roles in which the white guy always triumphs over them in humiliating ways). However, the character of Wu Mei (Michelle Krusiec who I don't have real issues with other than the usual cavalcade of Hollywood roles pandering to the sexuality of white dudes, but even Maggie Q tries to hide her last name) plays up to every single Love You Long Time/Yellow Peril convention in existence.

Her initial rejection of Jeff was a subversion that was easy to see coming and although her subsequent engagement to Pierce, although it was a sham, the episode ended with a disgusting glimmer of hope for a coupling. Meanwhile Chang is standing right there with no impact on the storyline at all other than translating some Chinese characters. On the back of a week where Donald Trump has been sniffing out every camera he can and bombastically proclaiming to everyone how China is going to crush the US under its steel jackboot, the hostile takeover of Pierce's moist wipes company felt particularly alarmist.

Another terrible coupling was taking place in acting class where Troy pretended to have been sexually abused to give his acting more credibility. I noted in the past that they seemed to be hinting in this direction but now that we've sort of arrived, Britta/Troy just doesn't feel right. It's probably related to Troy being such a man-child. I just have a hard time believing in relationships where there's clearly a parental vibe. Unlike Jeff/Annie which has an even wider age gap, these aren't two mental and emotional equals, no matter how infantile Britta occasionally behaves. The rest of the storyline was a perfect skewering of the pretentious world some actors seem to inhabit.

Also a great skewering of pretentious over-analysis was Abed's thread. However, that was ruined by the presence of Stephen Tobolowsky as the Professor. Much like Richard Kind, he repeatedly plays annoying trolls professionally. As soon as I saw him I knew I was going to be annoyed by the whole thing because it assured Abed's victory before we had even seen any friction between the two. Even though seeing Abed destroy him was mildly enjoyable, it would be interesting to see him go down for once, kind of a "You still have much to learn, young Jedi" deal.

There really weren't many saving graces this week, it won't get much if any repeat showings over here. Vastly disappointing.