Connie goes on a date with her state trooper boyfriend. Kate looks after her boss's dog. 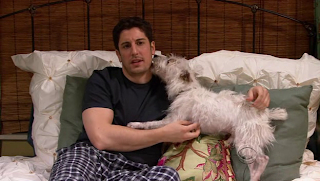 It's tough to know what to say about this show because everything that happens here has happened somewhere else before. Duh, of course the dog was going to make a big mess and then go missing. Of course one of the search parties would bring back the wrong dog. Of course they would hint at setting up Connie and Larry. I can say it would be a bad move, I think just being friend-mean to one another would have sufficed. It reminds me of the Robin-Barney pairing On How I Met Your Mother which many deluded idiots think worked. The fact they're able to bounce one-liners off one another capably doesn't mean they work or are remotely believable as a couple. Up until the end of the episode where Chris Parnell broke up with Connie and delivered that hammer blow, this was probably working out as the best episode of the season although that's not really saying much. The pacing felt a lot more natural although they still jumped from place to place in an ocassionally irrational manner. Maybe improvements are being made?