The glee club tries to raise money to send the Brainiac team to Detroit. 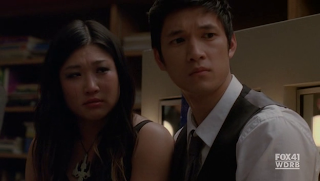 My mind is jumping all over the place and this was a really bad episode so we'll not dwell on it for too long. The natural starting point would be the Brainiac squad composed of Tina, Mike, Artie and later Brittany. They're really not consistent with Brittany's mental capacity. It's entirely possible for people to have tons of useless facts jammed in their heads and yet lack common sense, but I don't think that's what the writers were shooting for. Everything about her is played solely for laughs, at all costs. It was nice to see Mike be a little bit more vocal and forceful but he was quickly shunted out of the way so they could focus more on all the annoying characters. As for Mike, he dances, plays football, is a Brainiac, dates Tina, eats dim-sum, is a ninja... is there anything he can't do??

Charice returns and blows everyone else out of the water with her ridiculous voice. Every song after hers almost felt like an anticlimax, especially by the point we got to the much hyped Mercedes performance of an Aretha Franklin song. With the whole episode building up to that, her having yet another pointless strop and fight with Rachel, it felt very tiresome. She's another character played purely for laughs. The writers have absolutely no idea what to do with her having revolved every other major storyline around Rachel who occupies too similar a position within the group. Mercedes's general buffoonery and diva behavior in this episode felt more like a skit than a natural progression of the story. While she has witnessed Berry get things she wants by throwing tantrums, she should know better than anyone that everyone hates her for it. Poorly plotted, for no other reason than to provide a manipulatively sappy apology and make-up scene.

I complained about Stephen Tobolowsky's appearance on Community and he shows up again here playing a creepy weirdo yet again. Although he comes through in the end and saves the day stumping up the money for the Brainiacs and the Glee club's trip to Nationals, the less we see of him the better. Considering how much the writers really, really, really want people to have more tolerance and acceptance for gay people, it's curious that Kurt is such a flaming stereotype, and Tobolowsky's character is strongly hinted to be a pedophile. Good job, guys. Also appearing was Will's ex-wife and it's suggested at the end of the episode she's set to become a whole lot more antagonistic towards the end of the season. I really think the way she has been portrayed so far on the show is at best lazy and cartoonish, at worst it feels like a writer settling a score with an ex of his own. It's still never really been addressed that the reason she lied to Will is because his eye started roving - ie he was at fault! It never will because this show is so damn shallow.

Speaking of shallow it's goodbye to Gwyneth Paltrow's substitute teacher Holly who looking for the slightest excuse flits off to Cleveland (possibly the only example ever of someone ascending the career ladder by moving to Cleveland) Will in the lurch. Now it seems like they fully intend on reviving the Will-Emma relationship, a relationship that never got started, never had any chemistry and never had my interest at all. When they were conceiving the pilot, they got together in the writers room and agreed that well yes, ultimately Will/Emma will be our endgame. Then they actually got the thing casted and it flat out didn't work, but they just kept charging on with it anyway because that was their plan and if anyone disagrees they're sexist or homophobic or racist, etc. etc. forms of intolerance.

Looking at the summaries of future episodes, I don't hold out a lot of hope that things will improve. An episode like this really serves to highlight how paper-thin this show is and how block-headed audiences can be that they still buy all this shit hook, line and sinker.