The gang have a retroactive look back at the year that was. 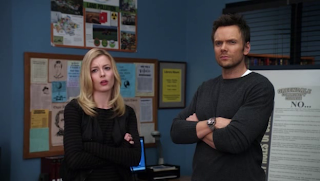 Back on form after last week's horrific misstep, we get a clip show to reinvent all clip shows. Usually, recap episodes exist to do too things; fill new viewers in one what's been happening, and more importantly, save money but this episode fails at both those objectives with all new never before seen set pieces being recalled. First we get the revelation that Jeff and Britta have been having secret NSA sex. The fact they would do that is not entirely surprising, even without Abed's recollections, we can call back to events actually seen before in Mixology Certification where they were groping one another in the back of the car. It also provides a little more context for the shocking "nipple play" revelation three episodes back. It also does a good show of displaying how emotionally closed off these two are that their multiple liaisons are so casual and once exposed, there's not even a suggestion that they will continue.

All this comes as quite a shock to poor Annie, who like a majority of viewers like to think of Jeff and Annie as quite a prospective couple. There's a magnificent self-skewering of all the little shots purposely injected over the course of the season where they've shared "moments". Dan Harmon the notorious Internet troll strikes again, as the Jeff/Annie montage is immediately followed by a brilliant Abed/Pierce montage. Of course it does mean more between Jeff and Annie because of that kiss. But either he's not ready to acknowledge that yet or she has simply been swept away on a sea of romantic novels. Interestingly, in the montage, there's a pointed shot of Troy looking jealously as Jeff and Annie interact. Real, or more trolling?

Perhaps knowing that last week's episode would piss off people like me, Pierce is quick to wonder whether Chang sliding through the air vent was a new stereotype. Is he officially in the group or not? Hard to tell. At times, the self-deconstruction of the show feels a bit mechanical, but it's still a fun episode overall. Like House's chicken run, a little goes a long way with the flashbacks. We don't need to see what exactly happened on the saloon visit or St. Patrick's Day or any other of those ridiculous situations; The mere fact they happened is awesome enough. This may have been a clips episode with the same usual weak structure all clip episodes have, but the fact it was done Community-style was awesome.