How I Met Your Mother - S6 E20 - The Exploding Meatball Sub

Marshall quits his job at GNB to pursue his dream of being a smug elitist lefty shill environmental lawyer. 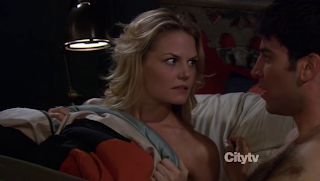 The nostalgic feeling to be had when you're about to leave someone or something behind.frequently referenced in this episode is one that sounds very familiar to me. It stops Ted from breaking up with Zoe and as we heard in a previous episode, things are about to get a lot worse on that front. It almost stops Marshall from leaving GNB, a place he claimed to actually quite like in Episode 8 of this season (So much for consistent plotting) leading him into the arms of a group, the NRDC who as demonstrated by the Hispanic professor associated with them, are inherently selfish and couldn't care less about the well-being of its advocates as long as they've successfully conned them into buying whatever crap they're selling.

Lily's stance has also changed since earlier on the season, although she seems to vacillate depending on her monetary situation. While she acts out rather dramatically, in the end she and Marshall are able to reach an easy compromise, proving their synchronicity yet again. I liked that Barney's sadness over Marshall leading was specifically not a psychological response to his abandonment issues (at least not directly), but rather a silly revenge plot. He works best when existing in his own little world.

This episode was fine, nothing special. It was pretty much just filler, well, filler with a plot development but environmentalism, blah who cares.

Email ThisBlogThis!Share to TwitterShare to FacebookShare to Pinterest
Labels: tv episode recap How I Met Your Mother