Jim is getting ready to deliver an important speech when Kate calls him away to spend the afternoon with her. Connie pitches a children's book to a publisher. 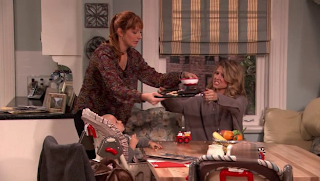 It's pretty astonishing that these people actually hang out with each other all told. I thought the ribbing was mostly friendly antagonism, but Larry is just plain antagonistic especially to Connie as both she and Jim are about to deliver presentations. Let's assume that all of her time is spent taking care of Tiffany and her children (since Tiffany is clearly incapable of taking care of them herself) so she really doesn't get a lot of time to go out and meet new people other than Kate. Larry meanwhile has both the "punch her in the arm and run away" thing going and also he's just plain too stubborn not to hang out with Jim when Connie is there. This is the only possible explanation as to why they keep getting thrown together and really it's just grating because although Larry's criticism leads to Connie making changes to impress the publisher, none of it was constructive, all of it was mean-spirited.

I forget what Kate is supposed to be doing for a living but she should certainly know better than to drag Jim everywhere when he is supposed to be a) working and b) rehearsing his speech. A more attentive partner would ensure their other half was ready for moments like this. Perhaps he did not stress to her adequately the importance of what was about to happen for him beforehand, but it was still very selfish of her considering she was trying to prove a point about how "spontaneous" she could be. As everyone points out, she is clearly in the wrong even though it takes her a while to admit it.

I had satisfactory fun while actually watching this episode, but now that I'm starting to think back on it, these characters are starting to shift from bland to annoying, and not in the good way either. I'd have to look back on it, but I'm sure the public restroom Jim was drying his pants off in had a mirror, so he should have been able to see when they got stolen. When they panned the camera away like that, I was expecting a security guard to be standing there when they panned back but that apparently happened later off screen.