Larry and Jim juggle trying to land a big money client with a pub quiz. Connie and Kate visit a spa. 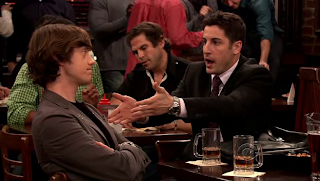 The "moral" of this episode espoused by Larry made no sense whatsoever - they really need to get rid of his narration. Everything else that happened in the episode was exceedingly telegraphed and paper thin. They never explicitly mentioned that the client whose name I've now forgotten was involved in IT but I just assumed and of course was right - if there's a super-rich nerdy looking dude involved with a business on TV, it's now always social networking. I haven't got round to seeing that movie yet, but I assume this character was based on Mark Zuckerberg  who's also a douchenozzle with a slutty Asian girlfriend. I liked the women entering the club and swiftly exiting because nightclubs suck. Mostly this made me want to watch Scrubs - some good Elliott episodes. Mad Love is still pretty bland on the whole. Maybe they could bring back Lizzy Caplan?