Serena's extended family is in town to have their family portrait done for a magazine shoot? The lives of rich people are not our lives. 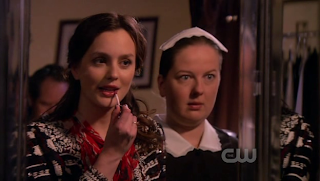 Episodes like this don't help my satisfaction level with this show. When Chuck angrily said about Dan, "He's not a part of this world!" I was reminded again of the way Juliet was 'banned' from Columbia by the very judgmental Non-Judgmental Breakfast Club. Other than crushing on their women, it's not clear why Dan would want to be a part of that world. Everything about is corrupt and the people are callous and cold to the touch. It's something he should know well by now. On the other hand, it's very easy to see how someone like Serena's cousin Charlie is seduced by the high life. Serena's air-headed generosity underlines the best her world has to offer especially for a naive backwater Florida kid, but Charlie's choice to stay in New York will likely be a huge mistake, scarring her or warping her into someone barely recognizable, like Jenny.

On the subject of Serena's family, I couldn't care less. I don't recall past episodes of this show very well, I gather Lily's sister Carol was featured in the flashback episode a few years back. At the end of that particular episode, Lily decided to run away and be boho with Carol, but obviously in the intervening years, she returned to her regal position in the New York socialite circles. Exactly what happened was supposed to have been covered in a spin-off show, but nothing good, it would seem. Judging by this frosty encounter, it would have been incredibly boring anyway. Any scene with Billy Baldwin in it was also a snoozer. He has a great villain voice and appropriately greasy hair, but his scheme to have his picture taken with his kids made no sense... actually, scratch that, the entire plot of the episode with the Party of the Week being a photo-shoot for New York Royalty made no sense whatsoever. I couldn't really follow what was happening or why. First the Rhodes/van der Woodsens were ostracized because of Lily's legal troubles, then they were slotted back in but actually not? I didn't get it at all. Rich people are weird.

Count me in as someone who's never been invested in a Blair/Chuck pairing. After the cliffhanger kiss of the last episode, it seems she decided what she really wants is to ditch Dan and get back together with Chuck only decides this after lazing around a whole lot, confusing both of those guys to the point where Chuck forms a bizarre alliance with the randomly reappearing Epperly to spy on and manipulate Blair and Dan. When Chuck arrives to interrogate Dan, Dan handles in it the worst possible way, making the true identity of Blair's kisser painfully obvious. It's typical of the stubborn Dan though, attempting to moralize in the face of someone who has absolutely no interest in anything he has to say. When the scheming in unveiled, Blair realizes that Chuck is not the person her romance addled brain made her think he was and she rejects him all over again. It's pretty rich for her to call him out on his antics though, considering her own track record. While that aspect of her has been toned down since she has spent time with Dan, if when she ends up together with Chuck, they will never stop trolling people.

Speaking of trolling people, Vanessa was hanging around eavesdropping on people for no apparent reason and once again the episode ended with her trying and failing to warn Serena about something. At least she's not as shoehorned in as Nate who had two scenes sitting on the couch with Raina yapping about stuff that had no superficial connection to the rest of the episode and existed more to set up future episodes. The end of the episode hinted at a Dan/Charlie hookup - why does he do this to himself? The Prince from the Paris episodes showed up too, presumably to woo Blair. I wonder how long it'll take for him to reveal his secret inner scumbag. I don't think I can say I liked this episode too much. At least it set up some stuff for future episodes, had Blair telling Chuck where to go and a sweet moment between Blair and Dan.