Ben hooks up with a girl named Vivian (Lizzy Caplan) who turns out to be Crystal's new secretary. Other irrelevant stuff also happens. 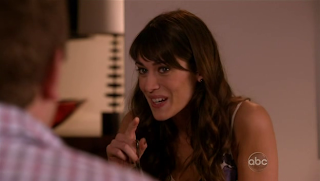 All I really have to say about this episode is that Lizzy Caplan was awesome as always, her storyline with Ben was funny and sweet. Becoming a surrogate mom to Roman was a pretty interesting take - Given how cynical Vivian is, it really underlines how distant Crystal keeps herself from him. It's too bad she's all set to leave at the end of the episode, I'd have liked to see more of her around. It's entirely understandable (to me anyway) how Ben falls so head over heels with that dry, edgy charm. Now that he's come around on the idea of long term relationships though, his self-realization is punctuated by frequent appearances by Alice, suggesting future encounters of a romantic nature for them.

The other crap happening this week wasn't so interesting. They've been trying to put this guy in a mascot suit in every week and I've just ignored him so far because I assumed they would realize how stupid/annoying he is and write him out, but this week he becomes a fully-fledged member of the plot, invading Alonzo's office. Alonzo is too soft to do anything about it of course (until the very end of the episode at least) which indicates to me his NBA career was probably ended by a similar lack of gumption. Alonzo of course, and I'm not sure how I didn't notice this sooner, played Jack's superior at the hospital in the season 3 finale of Lost "Through the Looking Glass". Crystal's storyline was equally uninspiring though we do get to see another example of how simple Roman is, so easily forgiving her for all her years of neglect. For a season finale, it all seemed to wrap up a little too cleanly.

Will it be a series finale? A few weeks ago, the prospects were good for this show but a slashed season order coupled with falling ratings may indicate otherwise. Assuming it survives, I have some suggestions;


This episode was nothing special, but was raised from the depths of recent episodes by the appearance of Vivian. On the whole, not a memorable season.