Liz vows to take a more positive approach to life but runs into a roadblock. Jack is left holding the baby and makes wishes he later comes to regret. 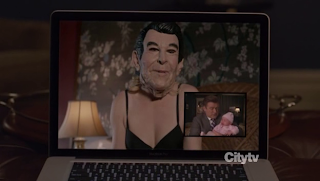 Last week Future Jack alluded that Avery would not be in the picture, and this week she appears to have been written out in fairly farcical and spectacular style, having been kidnapped in North Korea and forced to marry Kim Jong-Il's son. The Laura Ling/Euna Lee fiasco is referenced, and in parallel with the downfall of those two being their extreme selfishness, it's a similar story for Avery who gets caught up chasing her career rather than staying home and tending to her daughter. Jack is also complicit, taking it upon himself to decide what's best for her and urging Avery to stay abroad where a terrible fate befalls her. What was supposed to be a positive time of growth in his life is cut down brutally.

The same goes for Liz who, having turfed Tracy from his secret hiding place in her apartment, is faced with the failures of her life so far and is compelled to change for the better. Problem is, she's tried so often in the past, and it has always ended the same way so it's tough to take seriously. She is quickly sidetracked by the issue of a plastic bag stuck in a tree outside her window and is consumed by that rather than change. The end result, ten more bags getting stuck in the tree just when she has finally removed the first is emblematic of her own struggles with her apathy.

Tracy's attempts to wedge his way onto an inside joke between Kenneth and the henchmen is sad and drawn out. It was the low point of a very average episode. The high point was the flute vs piano battle between Jack and surprise guest star Condoleeza Rice playing herself. Margaret Cho as Kim Jong-Il was... confusing. I'm still not sure what to make of it. The final scene, with her/him running past Tracy was bizarre to say the least. Does it indicate that Avery's kidnap is staged? I have no idea, the narrative lost me.