The Dean interrupts a sham lecture and Shirley goes into labor. 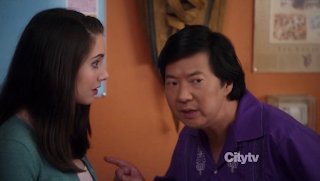 At the end of last year, the group decided to take anthropology so they could "take it together" but it appears Annie was the only one who actually worked on it. Considering most of Professor Duncan's classes were obviously fake, one wonders how she was able to maintain a course and actually learn anything but hey, good for her. When the Dean showed up with the journalist to sit in on the class, I expected her to crack under the pressue and admit it was all a sham, but luckily, Shirley started having contractions and that path was averted.

It's too bad they had to go and explicitly mention that Abed delivered a baby, that whole thing was better when nobody else noticed. The subplot with Pierce buying the rights to his and Troy's handshakes was glorious though. A little too easily resolved at the end, but a lot of fun while it lasted. Unsurprisingly, they were totally unprepared for their test in the end. They'd probably spent all their time watching Babylon 5 reruns or something. As for Pierce, he got to snipe at side characters Vicky and Fat Neil who seem to have taken to one another.

The centerpiece of this episode was of course the birth of Ben Bennett, Shirley's new son, live in the classroom. These are always awkward to watch because TV never really seems to get it right and this is no exception. Britta's reaction when forced to face a situation which she frequently advocated without actually having ever experienced was priceless though. Chang concedes fatherhood to Shirley's boyfriend Andre in the end, but does get to have the baby named after him after reeling off one awesome anecdote after another in an effort to calm her. This was a good episode of television, though not close to the top tier of what this show has to offer. I enjoyed it fine though.