With the reconvention of the academic year, Jeff is keen to keep Pierce on the outside of the study group. A successful wing of the college meanwhile plots to take control of the whole pizza. 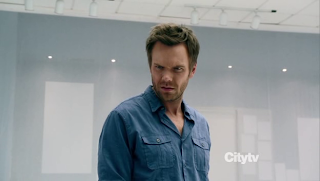 1 - Ship teasing already! By now I just don't expect it to happen and it's pretty cruel for Harmon to keep hinting at it.

I don't normally advoicate autotune but it could have helped with the musical intro to the show.

What took so long for Troy and Abed to move in together? I forgot they weren't already.

4 - Jim Rash added to credits. That character is one very mixed bag.

5 - Did Starburns voice get squeakier and nerdier in the off-season?

Don't worry Abed, 30 Rock got moved to mid season too.

6 - The dean looks more villainous with that goatee.

8 - John Goodman's character reminds me of someone, I'm not quite sure who. Maybe just a generic creepy big, fat boss type.

9 - when does Abed or any of the rest of them for that matter find time to study?

19 - I thought he was trying to get his law recertification. Why's he taking bio?

This wasn't as strong as last year's stellar season premiere and it was kinda treading over ground already wel ltravelled.We already know Jeff has a deep, deep unspoken love for the group. I suppose there's a part of it which is about re-establishing old character types for new audiences. In that case it worked, Jeff as a snarky heart of gold type. Britta as a hipster know-it-all, Annie as over-sensitive. Troy as exuberant man-child and Abed as a media-obsessed weirdo Pierce as a would-bevillain and Shirley as a non-entity. The addition of Michael K. Williams as the biology teacher is an interesting change-up though, I'm looking forward to seeing how he develops. I'm not so enthused about John Goodman, but the thing that leapt to my mind instantly was the potential for a Vogler-type figure to Jeff's House. Which would mean of course that Dean pelton would be Cuddy. In conclusion, it was a good half hour but this show can do better.

"Community" airs Thursdays on NBC at 8:00pm EST
Posted by jigenzanittou at 00:23