John Reese (Matthew Fox Jim Caviezel) teams up with a mysterious man named Ben Finch (Michael Emerson) who has developed a computer program to identify people who will be imminently be involved in a murder. Together they aim to save as many people as they can. 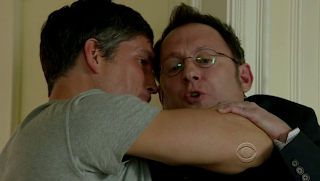 Musings after the jump.

I'll keep this one fairly brief - partly because there's not a whole lot to say about it. The pilot felt somewhat rushed, we zipped very quickly from set-piece to set-piece with very little time for establishing character which is of course Michael Emerson's specialty. I like the concept but the pace needs to be slowed right down.

As I may have suggested in my introduction, there were aspects of this show that reminded me of Lost. It's probably just because I watched it so much and see Ben rather than Michael, but Finch gives off that vibe. When he claims to Reese that he will "never lie to him" somehow I have trouble buying it. From a distance also, Reese looks a lot like Dr. Jack, maybe a bit more gaunt. With flashbacks and J.J. Abrams in the credits, there's an air of familiarity about the show.

The concept, that everything you do is being monitored and investigated by someone is what conspiracy theorists wet dreams are made of. There's a lot of potential in it, but in this episode, as I mentioned everything went by so fast that we never had a chance to stop and survey what just happened. This is what shows like Bones and CSI look like but this could be so much better with less of the helter-skelter action. Not that seeing Reese blow people out with his arsenal again and again isn't awesome - but at a certain point it starts delving into self-parody with the badassery on display - it's a little like Kratos. Yeah, he's hard but where's the context? Where's the character?

The implication is that in the Superhobo phase in which he is first introduced in this episode, Reese had been going round murdering would be criminals, Dexter-style. As a result there's a detective on his trail which I could do without; she was barely introduced but is listed as a main cast character and there's already so much for Finch and Reese to do that I fear she'll just get in the way.

I'm looking forward to seeing more of this show and how it unfolds, but the pilot wasn't as strong as it initially promised, especially with it's two cool headline stars. Must do better.

"Person of Interest" airs Thursdays on CBS at 9:00pm EST

N.B. Oh. This has nothing to do with Person of Interest but while I was typing this, I let my media server DVR ahem run on mute and it played Ringer. If I thought that show was hilarious with sound, I was not prepared for it without. Let's just say it bolstered its comedy of the year credentials!
Posted by jigenzanittou at 13:26