Ted runs into ex-girlfriend Victoria and vows to make amends for the way their relationship ended. Barney makes a wager with Marshall and Lily which they quickly come to regret. 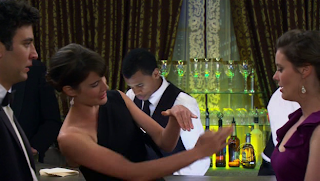 1 - The Ducky Tie was of course mentioned in the premiere.

A recap of Ted and Victoria's season 1 affair for new viewers - unnecessary for me because I must've watched those ones five or six times apiece.

2 - Noodle Incident coming out of the title sequence

3 - Robin's account (of Ted and Victoria's meeting at the ball) sounds much more accurate than Ted's...

4 - (Robin injects herself into Ted and Victoria's chat) Gosh that is awkward - difficult situation to explain!

(Ted talks about his groups dynamic still being intact) Now that he lays it out like that, it really is a Tangled Web (eh)

5 - They have mugs that look like those Lucky Cats at this shinjitsu restaurant, strange.

8 - (Ted follows Victoria to the bakery) It's still awkward

(Victoria announces she's about to get engaged) Sad faces all round, hah

9 - Barney is the master of hustle, have they never seen him with women?

11 - Hah, I love the dramatic music as it slowly dawns on them the depths of Barney's foresight.

15 - Pressing your faces so close together and speaking in breathy voices never harms anyone, guys. (Sure enough, Ted and Victoria kiss)

17 - (Barney's claimed shinjitsu skills are in fact, not a bluff) Hustled!

I'm in the Ted/Robin camp even though it's obviously doomed from all the indications we've been given. At least some sort of resolution is promised. I know I seem to be in the minority but I still don't see it between Barney and Robin which is why I foresee a dissatisfactory ending to the series for me in the future.

This was a great episode - a bit crude and outside my taste in parts but that I'll excuse because it's just the way friends in a group like that would behave to one another. I thought the Ted/Victoria scenes had a decent emotional heft. A lot of people don't like Ted but as with a lot of these other everyman central characters like Jack, etc. he anchors the show for me. If it was just the adventures of Barney, it would turn into a crap show very quickly such as, oh say, Two and a Half Men. Victoria is right too - Ted and Robin are a good looking couple.