Shivette suspects her husband is plotting bad things behind her back and really that's pretty much it. 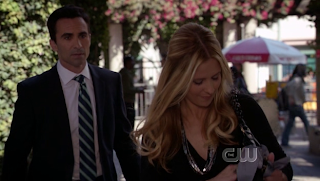 I'm not sure there's really much to say here because it was mostly confusing and heavily plot reliant. I expressed reservations when the show was picked up that a show whose central concept and title revolves around a particular conspiracy á la Prison Break might run out of places to go quickly. I don't think the writers of this show are nearly as smart as the ones on Prison Break, but they sure did conjure up at least one crazy scene.

Most of the episode revolved around Bridget's attempts to find out if Andrew had placed a hit on Siobahn which had a very thick air of pointlessness and inevitability over the eventual outcome (No, he probably didn't). It did remind her though how little she knows about her sister's life but how much she's come to enjoy the finer aspects of it. After playing Agent Machado and the shady man who worked with her would be assassin off against each other, she begins to feel comfortable and safe for the first time in a very long time.

Of course, she still has to worry about her non-existent pregnancy and the unknown threat of her sister, who a) actually is pregnant and b) appeared to be in serious denial about it. It's not clear what Siobahn plans to do about Bridget at this point. All she did was sit there in the bar looking pretty and get picked up by some dumb jock. What is she even planning? She seems like she doesn't have a clue. I almost think the show would be better if we got rid of her, the gangsters from Bridget's past and the mystery hit squad then rebrand itself as "Gossip Woman". None of the thriller aspects have really caught on yet.

That wouldn't be such a terrible thing if the show would do a better job of establishing its characters. Practically everything tends to play out from Bridget's perspective and we the viewer are just as confused as her. Best friend Gemma speaks often of motherhood yet we haven't seen her children yet. Andrew is always miserable and Henry is always a douchenozzle. Oh, and Jaime Murray's character is EVIL.

Discussion of this episode wouldn't be complete without mentioning the torture of Bridget's NA friend Malcolm. It was truly horrifying to see the gangsters shoot him up with his drug of choice - it just seemed like cruel and unusual punishment for such a peripheral character. Not smart on the part of the gangsters either - they're so anxious for Malcolm to tell them where Bridget is when they've pretty much made their policy clear; they're gonna kill him anyway so why should he bother?

This wasn't an episode the show could build on. In fact it wasn't very good, and felt very broad. There was however, a retention of the high comedy that defined the first two episodes! Bridget of course based her suspicion of Andrew for hiring the hit squad on a photo the assassin had that matched one Andrew had on his shelf. Upon hearing that pretty much the entire UES has the same photo, she "feels a lot better". Huh???