Bridget, or "Shivette" as the double life is now apparently dubbed is confronted with a huge problem and a very limited time in which to solve it. Agent Machado is smelling a rat but are his assumptions correct? 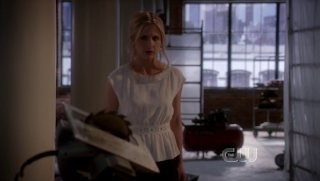 More hilarity in the latest episode of Ringer which spoils a heartfelt, genuine "Awwww" moment with it's final scene. I was unsure what the final scene in the pilot was all about, but I suppose we now have the answer - It was Siobahn, taking a call from someone (Gemma?) about Bridget. In the final scene of this episode, she reveals herself as in fact not dead, now apparently in France or perhaps Switzerland. Presumably France. This raises a couple of questions a) how did she get there? Not by plane, they have fairly stringent security nowadays. b) more pressing, why did she need her sister on the boat with her when she faked her death? To create a witness? She could have called out anyone, surely she must've known that someone who looked identical to her would start "Ruining Everything" as she says.

I remarked last week on how very Kate Austen Bridget's escape from the US Marshal was, and then I saw this episode. The constant compulsion to run, the fake name, nearly getting caught by her husband as she's hastily packing, the scene in the bank, flashbacks... Flashbacks! There's even Richard Alpert running around chasing her. It can't be an accident. There was of course another show there was an eerie homage to. Right after Jaime Murray is introduced as husband Andrew's business partner, we get a scene where Bridget is contemplating the dismemberment of the hitman slain at the end of the last episode. Everything around her is draped in plastic sheeting and in front of her is a power tool. Hmmmm.

She wimps out of that drastic action of course and after a hilariously contrived panic over the possibility of the body being discovered, she manages to stuff the corpse in a little antique trunk. Big guy, little woman. How hard could it have been? It's possible I've just watched too much television but every potential disaster with the body felt very inorganic. When the dead guy's phone started ringing in the middle of Andrew's speech at the party, I thought, "Well yeah. Of course." Remmber now, this was supposed to be a stealthy assassin knocking off Bridget. I'm supposed to buy his phone wasn't on silent? By the end of the episode, the hitman's body has disappeared, presumably spirited away by Siobahn, meaning she is actively trying to kill Bridget. Wonderful.

This Malcolm character has got to go, he's a big distraction at this point. This guy was hatching a plan with Bridget to run away with her and Siobahn's money? And do what? Go where? Evidently, he still has a class to teach, a professor he is. What should we expect from a guy in NA though? They didn't really think it through. The pressure of maintaining Siobahn's lifestyle (it's revealed she is some sort of charity organizer - how very UES) is getting to Bridget and she is prepared to ditch it but feeling needed by Andrew and drug addict step-daughter Juliet touches her in all the right places. Her relationship with her sister having crumbled in the intervening years, she is having a sensory overload in some very deprived areas of her psyche and comforting a distraught Juliet at the end was actually quite heartwarming. Her decision to stay of course inadvertently saves hers and Malcolm's life as he was being tailed by what I presume was the gangster Bridget was preparing to testify against. I presume because we saw his face for two seconds and really we know nothing about him at all. Well thought out plot thread there.

The Henry/Gemma subplot is somewhat jarring so far, doesn't quite fit with the rest of the show. Actually what it feels like to the viewer must be what it feels like for Bridget. She has no idea what the hell is with these people and neither do we. One thing is clear - Gemma has officially cracked up. She confronted the nanny and accused her of having an affair when it was her who pointed out last week that the nanny was a lesbian.

I had forgotten when the episode began that "Shivette" was meant to be pregnant, or perhaps had been hoping it was a bad dream, but that also continues unabated. At the party Bridget is handed a glass of champagne and I was thinking she might forget she was meant to be pregnant and drink away but she sidesteps it. NA discourages alcohol abuse too I'm guessing. She must be needing an ultrasound soon. Andrew has been through a pregnancy with his first wife and Gemma has kids, so they will be knowing what to expect. The game will soon be up unless she manages to get herself knocked up (hopefully not with Malcolm, that would be an awkward one to explain).

Final thoughts - I'm hoping Nestor Carbonell gets more to do soon, that ought to be good. Jaime Murray's character is creepy and bitchy as ever - as Chris notes, she's been typecast. Plus of course, she's British. When Bridget was on the phone with Malcolm in the loft, music was playing over the scene - I know it's CW, but I hope this isn't one of THOSE shows! It's a fun programme as long as you don't take it as seriously as it wants to be. This episode was a little bit script by numbers but alright.