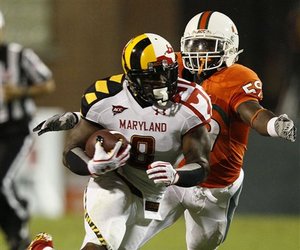 I actually don't see the problem at all with these by now infamous uniforms sported by Maryland. It's not like the pattern appeared from nowhere; it's the state flag, it features in the university crest and also on the shoulder pads of the Baltimore Ravens. Also, it's not as though Maryland is a storied historic program like Penn State or Notre Dame bound by rigid tradition.
There are a bunch of teams with medium to high expectations that really crapped the bed last week and could get buried this week if they don't watch themselves. Oregon should be able to handle Nevada ok but as for the rest of them...

Week Two picks after the jump.

Being big fans of Nick Foles, we both liked Arizona to hang with Oklahoma State but the Pokes are looking as strong as ever and likely to stay that way until they have to play the Sooners anyway. Mississippi State is really good but Auburn are still National Champions, their entire success cannot have been based on two players... right? I don't get how Penn State is ranked. Well, they won't be after this weekend, I believe that wholeheartedly. Air Force is ok but they don't have the top level playmakers Baylor does and TCU thrashed them last year. I like a smaller scale repeat of that.

I don't care how talented Boise State are, that was an embarassing loss for Georgia. Loyalists say Mark Richt should keep his job, pointing to (among other things) the discipline meted out on his team, ie when he suspends players for bad behavior they stay suspended unlike other schools such as, oh say, Florida. These are the same people saying college players should be paid! C'mon! We know in the SEC it's about results. If they lose to South Carolina and I think they will because the Gamecocks are a legit National Title contender, they might as well fire him on the spot because he will be a lame duck quacking. The program has taken a  step back each of the last four years and they're in danger of becoming irrelevant.

BYU struggled a lot more than I thought they would last week, the object lesson being that it's tough going south and getting results. Texas isn't as strong as past years but they should still be able to pull out a ten point win. Utah is apparently a hot pick to win outright but I think USC should still be able to hold out at home. I have no idea what's going on with the Trojans. On the one hand people are saying they have a top recruiting class, on the other hand, you got a cross-section including some of those previous saying they're no good! Perhaps they're just too young. Looks like my Big Ten pick is down the toilet already. I didn't like what I saw from Michigan and assuming Notre Dame doesn't implode like last week, they shouldn't have an especially difficult time.