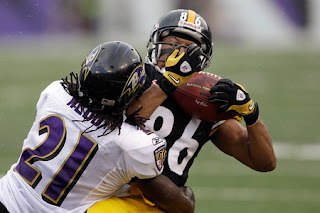 Week Two tends to be overreaction week. With only one week to judge how a team will play going forward, it's easy to make snap decisions and assume that because a team won big, they're for real. You really need to take all factors into account. Did the game mean more for one team than another? Was one of the teams just really awful? Was it all about the matchup? Even though I split, I don't feel bad about any of the picks I made in week one and feel like a lot of what happened confirmed what I already knew.

One of those is that Kyle Orton really is that mediocre. Hilariously, there was a lot of sudden backtracking on the future prospects of the Broncos with many pundits who had backed them for success leaping from the bandwagon and proclaiming, "OH, I KNEW ALL ALONG!" which is strange as I distinctly heard them declare that Kyle Orton would win games for them. Y'know, like he did last year. Another curious fact from last week was that the NFL's Best Looking Team absolutely destroyed the Ugliest Team (both literally and figuratively).

I think the Raiders will run all over up and down on the Bills, but it wouldn't surprise me if it went the other way. This should be a fun game to watch. Over in Detroit, the Lions have reason to be optimistic for once, with an excellent road win playing below-par. With the Chefs coming to town, I expect no less than a blowout. Matt Cassel threw for 3.3 YPA last week which seems low but that's just who he is. He doesn't give you a chance to win. The Ravens made a lot of people, including me, look silly last week. I'm happy for them because I hate the Steelers, but let's wait and see before declaring them for real. No championships have ever been won in September.

Cam Newton had a field day against the Cardinals, but let's see him do that against a real defense now. I think Rex Grossman will prove that 422 yds didn't actually mean a whole lot. Donovan McNabb is finished (he was only marginally there to begin with) but the Vikings can still run it. The Jets were lucky to escape and I think they'll have a tough battle against the Jaguars - a spread of 9 is way too high. 14 is not high enough for the Seahawks. Coincidentally (or not??) Bill Leavy is officiating that game. Bad call (Ho Ho). Pundits are outraged Seattle didn't push harder for someone like Kevin Kolb or Kyle Orton. To me, you only have to look at a team like the Chiefs who hitched their wagon to Cassel and gave him a big contract as a mid-level QB and now they're stuck with him and going backwards. I think that's what you get when you try to "fix" the position with anything other than an elite grade player. Andrew Luck or Matt Barkley would do nicely for them.

I wonder if the aforementioned ever listen back to themselves when they babble like idiots. Rick Reilly was yelling about how Tony Romo would never be any good what with having fumbled the snap in the playoff game against the Seahawks back in January 2007. But wait! Kyle Orton dropping the snap last Monday and ending Denver's chances? Fine! No Problem! Not indicative of anything! Then we get Trent Dilfer. This guy really gets paid by the word. In his latest desperate attempt to claim Mark Sanchez is going to be a S-Rank QB, he compared him to John Elway. What an insult to the greatest football player of all time! Sanchez has the kind of team around him that Elway never had until the end of his career and he is by far the weakest link. I might take the much maligned Chad Henne over him. As opposed to Sanchez who has infused his blood with four leaf clovers, Henne has been beset by bad fortune and is better than public perception.

One last note; It came to my attention that the New York Giants (and Jets for that matter) have an official Cheez Doodle. For Real.