Auditions for West Side Story open and Kurt and Rachel head the line. Rachel's birth mother Shelby returns to Ohio to teach at McKinley High, Quinn's former baby in tow. 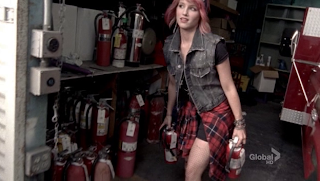 One of my biggest complaints with this show is that it doesn't know where to draw the line maintaining asemi-serious atmosphere and cheap jokes that reduce the impact of everything else and once again, right at the start of the episode was a fresh kick to the face in that regard with the biggest culprit of this nonsense, Brittany. She starts the episode aiding Kurt in his school presidential campaign and we'll get to him in good time but ultimately, Brittany decides to strike out on her own campaign and promises Kurt that she'll "see him at the debate". While she claims to not be smart enough earlier in the episode, at this point the only way this character can be salvaged (at least in the eyes of someone who actually sees this show for what it is rather than one of the drooling legions who lap up everything that dribbles from the teat of Ryan Murphy) is to reveal it's all some sort of deliberate act.

Kurt rejects Brittany's effeminate ideas for his campaign, insecure as he is about the way he is perceived. Before his self-awareness fully kicks in, he auditions for the lead role in West Side Story by singing a Barbra Streisand song which although well performed, is obviously a bizarre choice for a relatively masculine character. Especially as he is performing for people who know him well, the coach, and Artie, they have trouble getting past their general perception of him. His father, who has never really understood him also encourages him to seek roles for suited to his own particular style (ie. not heterosexual) which, after last week's sub-humiliation, further damages his belief in his range of talent.

Blaine is far too accomodating of Kurt's whims, not wanting to step on his toes and audition for the lead himself even though he is clearly a better fit. Kurt can see it too, barely able to admit it to himself though he is. Blaine surely has ambitions of his own and we don't get to see whether he accepts Artie's invitation to read for Tony. Given that, the answer is probably NO because the writers probably see too much of themselves in Kurt and ar determined to make him the hero of the piece.

While the real hero of the piece works in Burt's auto-shop and continues to be unsure of his future, his girlfriend (they ARE dating after all) has to deal with the return of her birth mother. I don't really remember what happened between them at the end of season one, but relations are exceedingly frosty between them at this point. Rachel is very hurt over what she perceives as Shelby's rejection of her and determined to very dramatically reject her back. Take that! Shelby isn't too fussed as she has a new daughter to take care of. She encourages Puckerman and Quinn to clean up their act and come visit. While her main appeal is to Quinn, Puck is more eager and heads right over. If he grew out his hair from that ridiculous looking mohawk, he and Shelby would look like an age appropriate couple which was a little distracting while they were cooing over the baby whoo looks a little small for 15 months (But I don't know babies that well so...).

Quinn is continuing her quest to be an outcast (Although the ribbon bandana does NOT make her look more hardcore) and is roped by Sue into making an anti-arts video. She stages an angry confrontation with Will, blaming him for her current aimless predicament but for once he grows a spine and angrily retorts with a You Suck speech, ordering her to grow up and take responsibility for herself. With that and a push from Puck, her "skank" phase turns out to be shortlived, washing the pink out of her hair and readopting her floaty conservative dresses - and effectively declaring war on Shelby, announcing her intention to reclaim custody of daughter Beth. Looks like that one backfired, Shelby. Funny though, I don't remember Quinn mentioning her all of last year.

There was a lot more set-up than pay-off going on in this episode. Things moved a little too quickly on the Q front and there was a little more focus on Kurt than I can usually take. It was ok, but nothing particularly memorable and funnily enough, despite the use of show tunes over chart hits, no show-stopping numbers either.

"Glee" airs Tuesdays on Fox at 8pm EST.
Posted by jigenzanittou at 00:35