With snow coming down, Caroline is forced to find alternative accomodation for her horse Chestnut. 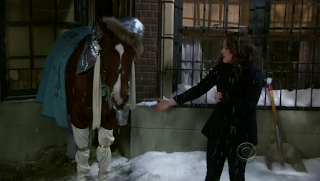 After a very strong How I Met Your Mother episode, a quality 2 Broke Girls episode - good hour for CBS. The involvement of the other diner workers was kept to a minimum allowing the girls to be the girls and Kat Dennings to be Kat Dennings. It's not always classy, in fact it's rarely classy but it's a lot of fun. If they could just get rid of the pre-title throwaway scene and the particularly annoying and stereotyped duo of Earl and Han we'd be gold.

I said several times that the horse had to go and so it comes to pass - Max gets pretty choked up, lending to the John Marston theory regarding her - a romantic masquerading as a cynic. Anyway, cool episode. Hope to see more like it.