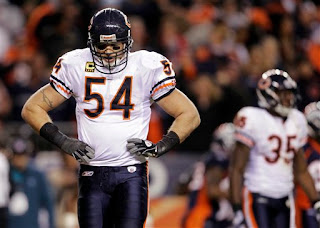 Rather than talk about the disastrous week I had last week picks-wise, we'll discuss a dish I made while listening to the radio yesterday which involved hosts and pundits talking about how tired they were of talking about Tim Tebow for about three hours. Seriously. How can they claim that everyone is giving Tebow all the credit and giving none to the defense, the coach, the O-line etc, when that's all they spend theor time stressing? Damn hypocrites.

The only thing last weeks Jaguars vs Buccs game proved tome is that Raheem Morris is even less deserving to be an NFL head coach than Mel Tucker. Mel Tucker strikes me as Romeo Crennel II who ironically also got named an interim this week. Curiously, all three interims, Tucker, Crennel and Todd Bowles are black and all three probably won't get the head job. Make of that what you will, some suggest it's Rooney-rule related, to me it sounds like the buddy of the players getting a temp job. If one of them does get upped, expect it to look a lot like the Leslie Frazier train wreck going on.

That was reason enough to pick against both the Jags and Buccs in their primetime games. Sometimes a team with a new coach gets a performance bump in the first game following the firing, I don't think the Dolphins need much of one to overcome the flailing Bills. The Chiefs on the other hand are going up against the number one team in the league, who I'm tired of picking against and getting beaten each week.

I'm not tired of picking against the Rams, I'm rather amused by their ineptitude. Cincinnati has been beset by injuries but surely they should handle that one fine. The Colts play good one week horrible the next, it's tough to know when they'll bring it but 6.5 at home against another inconsistent in-division performer is too juicy to pass up. The Seahawks starting off at 1PM EST is a dodgy one but the Bears can't get out of their own way right now. They reacted to the Denver loss with the typical sour grapes and that may still cloud their minds here. The Cardinals have surged alongside the Seahawks but -6.5 is going way overboard. The value feels like it is with the Browns, awful though they are.

Saints against the Vikings doesn't feel like a contest, they are trending in opposite directions. The Redskins play tough in these division games so I expect a closer one than the Giants would like there. The Texans are another team I pick against consistently and I'm done with losing so I'm gonna go with them this week and they're clearly going to lose. The Eagles seems like a decent matchup against the Jets but the Jets get hot in December every year and I like them to conrol this one in the fourth quarter.

The Raiders had a horrible time of it last week and after that disappointment I'm not sure I'm allowed to pick them even if it is against the Lions. People still refuse to give Tebow any credit (despite what the media says) and at home this line is way out of sync with reality. The broncos should be able to hold it closer than that. The Chargers are coming back up but the Ravens are super tough and should be able to hold out and take control of the AFC playoff picture. On Monday night, I feel like you go with who you know and what you know is that you trust Pittsburgh ability to win hard games more than San Francisco.