Travis launches an assault on Miami Metro Homicide while Dexter plots to foil him. Deb is forced to face all her worst fears. 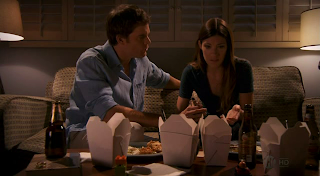 I have a running joke with James about how Friday Night Lights is the most hilarious comedy out there, but we might have to revise that because the new clubhouse leader is Dexter! We've all been wondering why this season has been so terrible but I think it's clear - the show has changed genre.

I don't know where to start or if I even want to start. Let's skip over all the dumb stuff that Dexter has been doing because I suspect we need to wait until next week before we can judge how effective the season was thematically (I can tell it's not going to grade well though). The Batista tied up on a bed scene was supposed to be incredibly dramatic with us all fearing for Batisata's life but instead it was unintentionally hilarious especially as Batista was nearly squirming out of the ropes. The Quinn storyline started off well this season but has sort of meandered and gone nowhere of late. Hopefully it will regain some direction next week.

DeborahxDexter? All I can say is HOT. What took them so long? In all seriousness, their relationship had a bit of a weird vibe to it for a long time, most notably when she was plastic-wrapped to a table naked at the end of season one. Considering what's happened between the two actors, it must be super awkward on that set. Not half as awkward as what transpired on screen though. Chalk up another win for (un?)intentional comedy!

The poison gas plot fizzled out disappointingly fast and Travis is later seeen with two random dead people he apparently killed just for the hell of it. What? This show used to be more subtle. I'm not sure they have any idea what they're doing anymore. They completely abandoned the I Hear Voices in My Head angle too. Maybe he jsut snapped out of it once Dexter forced him to look at Gellar's dead body again but it hasn't even been referred to. Did they just forget? I wouldn't put it past them. We did get the funniest moments of the episode from him then - constantly and conveniently picking up updates on various crimes related to him on the news and then the awesomely stupid painting of Dexter as the Beast.

The less said about Lewis the better, I think we need to let that one play out. It's disappointing that Matthews immediately assumed Deb betrayed him. He's been relying on LaGuerta for weeks to keep his secret. LaGuerta! Did he jsut forget that she hates him? How did she even know anyway? Why would he tell her? The whole thing is really stupid. I guess we should wait until next week to see how that one is gonna develop too.

I guess I'm feeling a little more charitable today. Considering a lot of it is obviously meant to be set-up I'm not sure how fair it is to call flat-out bad on the other hand it's really no excuse. Just an incredibly disappointing season overall. Ok, I jsut remembered Travis cocking his head to watch the teevee again. Yeah this episode was really not good.

"Dexter" airs Sundays on Showtime at 9:00pm EST.
Posted by jigenzanittou at 13:28