Caroline decides to sell her exclusive designer rings to fund a new oven for Max. 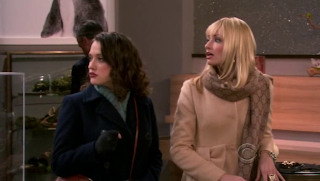 I spent weeks trying to defend this show from people who would beat on it but it seems that the show doesn't understand where it's weak - They must limit the exposure of the co-workers at all costs because they are not just unfunny but downright offensive to a man. It's not worth expanding on further than saying all three need to be either removed from the show or given immediate personality transplants.

The girls are good as usual, as long as they don't talk about their annoying co-workers. Their relationship is really sweet and complementary. There's not a lot of movement though on the plot front and as long as the flaws persist, I'm not sure how worth it is writing this up. We'll se how I feel in the new year - it's still a decent watch.