Detective Carter is thrown up as the next victim by the machine leaving Reese no option but to protect his nemesis. 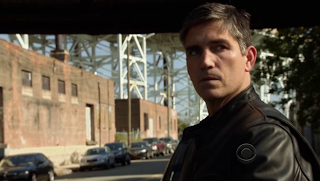 To me, this show is quickly running out of steam. Reese's ridiculous antics like pulling out a grenade launcher in the middle of the street and firing it in broad daylight were fun at first but they haven't changed it up any since then. I was hoping for more from this show than just another procdural, and we get the occasional insights like Carter's flashbacks in this episode but they don't really carry much substance or seem to feed any higher storyline as of yet and Carter is not a particularly intriguing character, not the way even Fusco is. When you make a character too straight, you run a major risk of making them boring and it's very difficult to write around.

The tone of the episode was more personal which was good, usually when Reese is the focus it can feel somewhat robotic, like the previous episode about the German spy. This Elias storyline is not that great either. I knwo the cops are meant to be crooked but how he's able to just walk into the homicide department and drop off a huge bouquet of flowers on Carter's desk with no one asking questions is beyond me. The captain says that Elias is tolerable and a necessary evil, but if he's dropping bodies all over the place I don't see how that's possible. All in all, very muddled and not as much fun now that the novelty is wearing off.

"Person of Interest" airs Thursdays on CBS at 9:00pm EST
Posted by jigenzanittou at 03:34