The New directions get set to compete in Sectionals. Finn and Rachel bring Sam back to the fold, Quinn plots against Shelby, Finn has an altercation with Blaine and Tina gets aggressive in her dealings with Mike's dad. 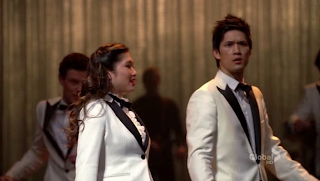 The sectionals episode is usually the mid-season finale and better than the surrounding episodes, true on the latter but strangely not on the former, presumably a Christmas episode awaits next week. I nearly fell out of my chair when Tina and Mike got prominent roles singing in the New Directions performance - where has that been in the entire run of the show? Mike's story got sewn up a bit too neatly and nicely - I have to imagine with half a season left there will be more to see there. On the other hand, how ironic would it be that Tina jokes with Chang Snr about the lack of opportunities available to Asian actors and the duo are relegated to backup duty for the remainder of the season?

I was surprised to see Sam back not just because I was under the impression Chord Overstreet left under a cloud, but there's no possible way in Hell it's that quick and easy to transfer schools, especially from one state to another with no parents in the school district. The manner of his reintroduction and the Dairy Queen joke was classic Glee humor - hit and miss, miss all the time with Brittany because it's way overplayed but here it works. The performance of the red solo cup song was cool, it seems that Kurt didn't really get it - unless it's a gimmick in the original - a little remniscent of Sam's performance of Friday at the prom last season. What's with the Sam/Mercedes nonsense? It didn't work then, and it won't work now.

In fact Quinn is a far better match for him. He seems to be a little too familiar with her story given he only just returned which can only mean that Berry was gossiping all the way back to Ohio in the car. Like the Mike story, she gives up her pursuit of her daughter a little easily, learning to grow down and enjoy being a kid. She certainly has been planning ahead too much even with Finn, plotting out their entire futures. I'm not sure aspiring to get into Yale is enjoying your senior year though - it'll involve a heckuva lot of work.

One of the good things about the sectionals episode is that it focuses more on the music rather than the drama. Sebastian, the kid trying to woo Blaine away is an incredibly annoying prick but he's still preferable to Kurt. While Kurt was whimpering about being bullied, Blaine was learning to box. I'll save 2012 predictions for next week, but I have a feeling that despite being the most ineffectual character on television, everything will work out for him and everything will work out for Santana and Brittany, as Ryan Murphy only likes happy endings. I suppose that's the right tone for a show such as this but as much as Schuester gets accused of playing favorites with his characters, it's pretty clear who Murphy likes.

"Glee" airs Tuesdays on Fox at 8pm EST.
Posted by jigenzanittou at 12:04