Dexter makes his way back to shore where Travis is plotting his final atrocity. 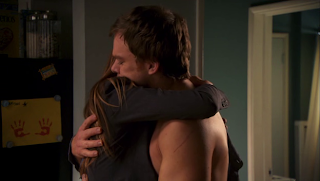 Holy Christ that was a stupid episode.I have been feeling really apathetic about this and been putting this off but let's bite the bullet and get down to it. We'll start from the beginning. I know we're just supposed to watch and understand how he's feeling at that moment but there's no tension with Dexter floating in the sea because there's still a whole episode to go and in fact, two more whole seasons to go. Once he got on the boat he of course managed to get in another random kill - at this point they're just upping the body count for the hell of it and I don't like it at all.

The same goes for Travis. I expressed my dissatisfaction with the way this whole thing unravelled after Dexter found that Gellar was dead. Gellar pretty much disappeared and the whole Travis sees people angle vanished. It's like it never happened! Basically we wasted the whole season on something that ultimately had nothing to do with anything. I said in my review of last week's episode we would have to wait for this week to pass judgement on the larger themes of the season. Well, there was nothing to judge because basically nothing happened. At this point, I have to assume it's more of a set-up for next season - except of course, Travis is dead, Brother Sam has been dead for weeks and the writers probably didn't think that far ahead.

We'll discuss minor things before the real weight of the episode gets discussed. The Quinn thing is obviously setting up for next season but I'm not particularly interested in it because, well, Batista is just not that interesting. He wears a cool hat and that's about it. I'd like, and I expect, that Quinn will resume his investigation of Dexter and of course, there will an added complication to that now. I truly have no idea what they are hoping to achieve with LaGuerta. Chris feels that Lewis sets up as a future villain who takes Dexter's criticism a bit too personally. It's unclear what the intent is with him as Travis ruined the surprise he left for Dexter but it certainly doesn't look like he'll be giving nerds a good name in any case.

OK, this is the part I've been dodging because it is so stupid and bizarre. Was Deborah actually going to pursue a relationship with Dexter? It's like her psychiatrist was pushing her in that direction and she was going along with it willingly without stopping to think, "Wait. Hold on. That's incredibly stupid!" I mean seriously. What has happened to this show? The by now, I'm sure infamous final scene has her of course walking in on Dexter while he is killing Travis, a season too late. A public service announcement for Dexter - drop the idiot ball! Maybe it's a pod person because the real Dexter wouldn't be so careless as to kill Travis in a place that Deborah told him to go and where she would expect him to be. Huh? Ridiculous!

As an episode, as a season finale this was very, very disappointing. I was hoping for some movement on key plot, themes, religious overtones, instead all we got was an incredibly predictable action scene on a rooftop - clichéd and complete with another random dead person. I feel like I would be giving the writers and producers far too much credit to assume that the themes explored this season will extend into next season because overall this season was really, really terrible to watch. Not fun at all.

"Dexter" airs Sundays on Showtime at 9:00pm EST.
Posted by jigenzanittou at 15:33