Dexter chases Travis, having discovered his secret but appears to be a step behind. Deborah has some unexpected revelations. 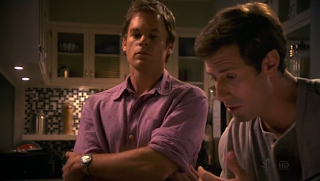 Strange episode where not a lot happened. The tenth episode of the first season is referenced by Dexter here - probably my favorite episode in the entire series and the contrast from then and now is stark as ever. I really wasn't inspired one way or another watching this; it was just so mediocre. I will say that the killing feels gratuitous now, which is funny considering the content of the show, but really did it have to go down that way for poor Holly Benson?

With his secret revealed, Travis gets a personality transplant, suddenly becoming way more assertive and controlling. The excuse is probably it's the partition of his mind influenced by Gellar taking charge, only without the need for a guise anymore with the Gellar spirit rejected following Dexter's corruption, but really it's totally cheating. I feel like the show cheated me because while we knew there was something wrong with Travis, there was no part of him previously seen on screen acting in this manner.

There are some curious concepts introduced in this episode - Lewis's video game from the perspective of the serial killer, which would not be so far-fetched as a real game (at least the Bay Harbor Butcher variant... maybe not so much Dahmer) seems to force Dexter to really think hard about his nature, and while he curses the memory and wisdom or lack thereof from Brother Sam, the existential crisis has officially been launched and he could turn to a higher power for forgiveness.

None of that matters though because this season has not been fun to watch. I'm jsut lacking the interest to dig deeper into what's going on. The hastily thrust in Matthews/Deb/LaGuerta storyline remains stupid. The Quinn storyline keeps getting dumber. What a roundabout way to get Batista into a position where he's presumably about to be strung up and threatened to be killed, because I'm not sure where it would be going otherwise. Man, this episode just wasn't good.

"Dexter" airs Sundays on Showtime at 9:00pm EST.
Posted by jigenzanittou at 13:09