Artie directs a holiday special starring the New Directions to be broadcast on local television. 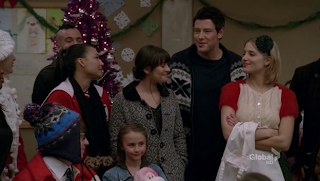 Very simple episode - sometimes that's better, as we get to focus on choereography and music but it was almost a bit too simple. basically nothing happened in this episode, it had a very old fashioned feel to it actually.There are one or two things worth mentioning though. It was jarring to see Sue act normally. The last time would've been the funeral for her sister last year but that was quickly followed up by a lot of agenda driven horsecrap shoved upon her by the writers and there's a hint of that here again with the bizarre Sarah Palin reference. Considering the source, it must have been an attempted dig of some kind which t this point is just sad.

Rachel never learns, does she? Quinn spends a lot of time being pretty and flirting with Sam too which is all very eh. Apart from Tina/Mike, the only relationship on this show that I ever liked and felt was really natural was Finn/Quinn. I'm just not interested by the alternatives, the writers are not good enough - they get lost and don't know how to progress them. Kurt entered everything with his bemused "this is beneath" face further cementing his status as show pariah. The music was very good in this episode, but Finn and Rachel selling her jewelry to donate to Sam's charity begathon was cringeworthy - it's the kind of thing this show does a lot and especially badly. I can't get behind that.

"Glee" airs Tuesdays on Fox at 8pm EST.
Posted by jigenzanittou at 12:04