Dan is working up the courage to admit his feelings to Blair just as Serena may be redisovering hers for him. Ivy's past continues to haunt her and Nate solidifies his position. 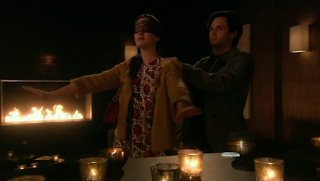 I noted in my How I Met Your Mother review that nothing there happens by accident but I really do suspect it may have been an accident that Serena refers to her past relationship with Trip which ended in a car crash and then in this episode we have Chuck and Blair doing a Diana - the princess, not the fictional media mogul. As soon as they got in the car I knew that was gonna happen - it's so cheap it's barely even worth talking about. Now we get sent to mid-season hiatus which means we have no idea what in the hell Lily's tearful shake of the head in reference to Chuck means. I thought that Blair might lose her baby but it seems they weren't quite that cheap.

Of course it was coming forever and a day that Chuck and Blair would end up back together. I was hoping we might get a Blair-Dan-Serena love triangle instead though - to bring the show full circle after it started with a Blair-Nate-Serena triangle. As soon as Serena talked about how Dan was the love of her life, that one could be seen coming down the line. This episode was about Dan plucking up the courage but will she be able to muster enough of her own and make another run at him? Especially since it would be quasi-incestual now. Hot!

Ivy panics after her Gossip Girl blast appears to lead to the big car crash and blurts out the truth to Rufus. She's about set to run, my feeling is that if she would stay, Rufus would talk it out with her and try and help her because he's too soft. Once she's gone though, he'll ,snitch her out without even thinking about it. Max approached Trip with the tip who it's implied paid him off - Why? What can a failing politician do? Speaking of Trip his feud with Nate is ridiculous, mainly because Nate doesn't have the mental capacity the writers are pretending he does.

This was a very frustrating episode. Not much of it made sense and what did was entirely dumb. Why is Diana conferring with Jack Bass? What does the accident have to do with her? Why is she coming back anyway? Why is Grandpa van der Bilt's plan so damn convoluted? When is this show gonna officially be cancelled? Too many questions and I have a feeling the answers will all be unsatisfactory.