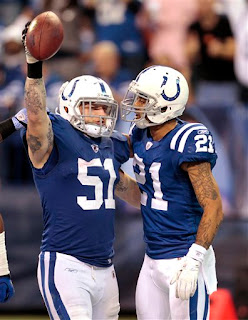 I don't have that much to say right now but what an incredible weasel David Stern is. He has been going around this week talking about the aborted Hornets-Lakers-Rockets trade that he nixed and of course chief in that concern is the fact the NBA owns the Hornets - he's talked about how the league is doing everything they can to save professional basketball in New Orleans. Hey asshole! You sure didn't lift a finger at all to save pro basketball in Seattle! Now there is a town that could actually support their team. What a lying scumbag. His league has no integrity. Let's hope the NFL doesn't follow suit bending to the will of idiots in their own league like the despicable James Harrison. When people like that are mouthing off and getting all the press plaudits, is it any wonder a guy like Tebow gets to be so popular against their will?

After rolling over last week I lacked faith in the Texans this week going on the road against a division opponent. The Bills continue to melt down and I don't see any reason the Broncos should have trouble with them. The next game is a real toss-up but ultimately one team is doing way too much talking for me to feel good about myself with picking them. With the Steelers set to start Charlie Batch, 15 is far, far too high. The Rams have a nice enough defense to where the Steelers won't be able to break that far off.

I like the Redskins in this next game but the value is with the underdog, the Vikes are not blown out that often after all. Similarly in the next game, which feels like a 3-pointer, the Bengals do have that tendency to allow inferior teams to get closer than they should. At home I like the Chiefs to outlast the fading Raiders while the Patriots should be able to pull away late from the Dolphins. While Reggie Bush's mom has a point about Kim Kardashian, that looks like a disatraction, no?

Seems like the Ravens are wearing down late in the season. Even at home, those 12.5 looks like too many to trust Joe Flacco with. 6.5 isn't enough to feel comfortable with the prideless Buccs though, a team that has far worse support than Jacksonville but never gets talked about in the same condescending tones. Speaking of the Jaguars, they're the victim of an inflated line. Injuries have stymied their progress but the Titans are no great shakes right now, especially if a wounded Hasselbeck starts. We need a Chargers win to give the Seahawks any hope of the playoffs, so that's what I'll pick; it helps that they are surging at just the right time, and Detroit tends to have a problem against teams that can actually play.

A loss by the Cowboys is likely preferable and they seem to matchup pretty poorly against the Eagles who are suddenly back firing like the dream team they were supposed to be. A little too late now... OR IS IT? It certainly took too long for the Seahawks to rev up. As long as they don't replace three-quarters of the team again next year, they should be a top contender next year. There's a bad reaction to the losing streak by the Bears, but it wasn't until last week that they got blown up. The Packers don't have the kind of defense that the Seahawks do and Josh McCown should be able to at least play like a professional quarterback. On Monday, I feel like these Falcons-Saints games are always tight. 7 is too much to ask against a high-tier team.